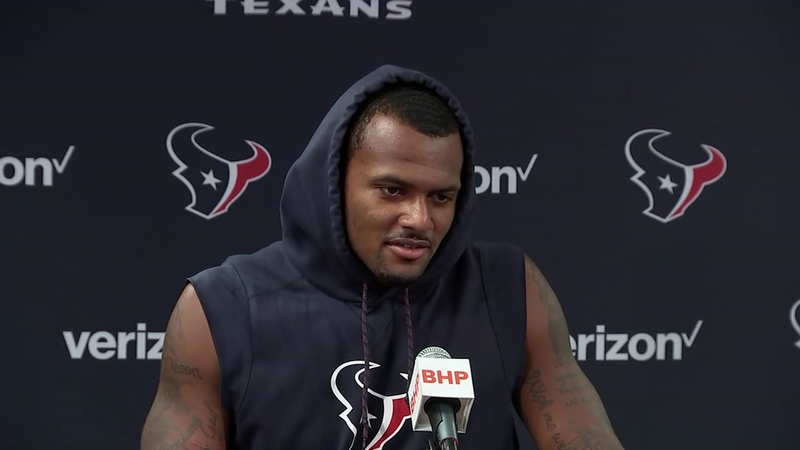 HOUSTON, Texas (KTRK) -- Many people were outraged when they learned that a small town superintendent made a controversial comment about Deshaun Watson.

During the Houston Texans press conference on Wednesday, Deshaun Watson finally responded to the comments made about him.

Instead of lashing out at Lynn Redden, then superintendent of the Onalaska Independent School District, Watson wished for peace.

"That's on him. May peace be with him," Watson stated.

The incident was sparked on Monday after the Houston Chronicle posted a meme on its Facebook page, referencing the final seconds of the Texans' loss to Tennessee, in which Deshaun Watson held on to the ball.

Texans head coach Bill O'Brien said he doesn't waste time responding to what he said are "ignorant and idiotic statements."

"In this day and age it's just amazing that BS exists, but we're moving forward," O'Brien said. "Our fans love Deshaun and we're really concentrating on the Giants."

Teammate JJ Watt told reporters that he does not think the statement deserves attention from anyone.

"I think it's a very ignorant comment that doesn't deserve anymore play," Watt said. "I don't think anyone who speaks like that should get any run. It's ridiculous."

Despite the racist post, Watt says that he's focused on the success of the team.

When reporters asked Watson what he thought about the comments, he replied, "Nothing."

"I'm not worried about what he had to say," Watson said.

He also said that he deals with his fair share of racism as a black quarterback. But despite the hate he "loves all people."

"I'm all about love, that's what I focus on," Watson added.

When asked if he thinks the superintendent should be fired, Watson said that wasn't his decision to make.

A special school board meeting has been scheduled for Saturday morning. On the board agenda is "personnel discussion with possible action regarding Superintendent and Superintendent's Contract."
Report a correction or typo
Related topics:
sportsfootballracismhouston texansu.s. & world
Copyright © 2021 KTRK-TV. All Rights Reserved.
More Videos
From CNN Newsource affiliates
TOP STORIES