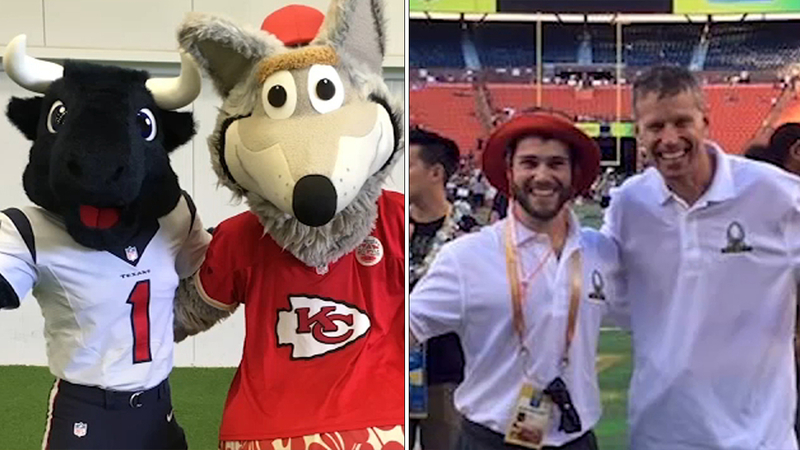 HOUSTON, Texas (KTRK) -- The Texans and Chiefs might be enemies during Sunday's playoff game, but the teams mascots' relationship means more than a single game.

Days before the big game, Dan Meers spoke to a group of students in the Kansas City area about attitude, behavior and character. The presentation wasn't all serious, the goofy head behind Meers gave away who he is.

For 30 years, he's performed as the Kansas City Chiefs mascot. However, he does more than games.

Each year, Meers dresses up as K.C. Wolf and makes around 600 appearances. Some of those are school shows where he motivates kids and shares silly stories about himself.

"Mascots. We use this stuff called ibuprofen every now and then," Meers said. "Your teachers use that stuff too."

Meers also lets kids get up close to the costume. A unique touch that one Kansas City native remembers well.

In fifth grade, Andrew Johnson wore K.C. Wolf's uniform. "From that day forward, I knew exactly what I was going to do for the rest of my life," Johnson recalled. "I was going to be a professional mascot."

Johnson's mascot journey started in high school, where once again, he called upon the K.C. Wolf.

Rowdy apparently has some beef with Toro.

"Andrew used to call me up at Arrowhead and said, 'Hey, I'm a high school mascot. I know you're going to be at the local grocery store, would you mind if I come with my high school costume and follow you around the store?' I thought, 'Well, it's kind of weird, but what the heck, come on,'" Meers recalled.

The awkward moments turned into something special as Meers hired Johnson as the back-up K.C. Wolf performer.

"You want somebody that's going to represent your organization in a positive way," Meers explained. "That's why I knew Andrew wouldn't be around Kansas City long. He's such a great guy and a great role model."

Johnson didn't last long in Kansas City. He's now in the NFL himself.

Johnson is the Texans' mascot, Toro. "A lot of the character that I portray in Toro are things that I learned from Dan," Johnson explained.

Being two NFL mascots has its challenges, including this weekend. The Texans, and the Chiefs play each other Sunday for a chance to advance to the AFC Championship.

"There's no bet this week," Johnson said. "But, I'm betting on the Texans." The two might be enemies this weekend, but their friendship will endure. Johnson is thankful for what Meers has done to get him to the Texans.

An influence Meers never saw coming when he placed his big, goofy-eyed character on the floor of Johnson's elementary school.

"My goal is just to have a positive impact on young people, whether they grow up to be doctors, teachers, plumbers, whatever they choose to do in life," Meers said. "Andrew just happened to grow-up to be another NFL mascot."