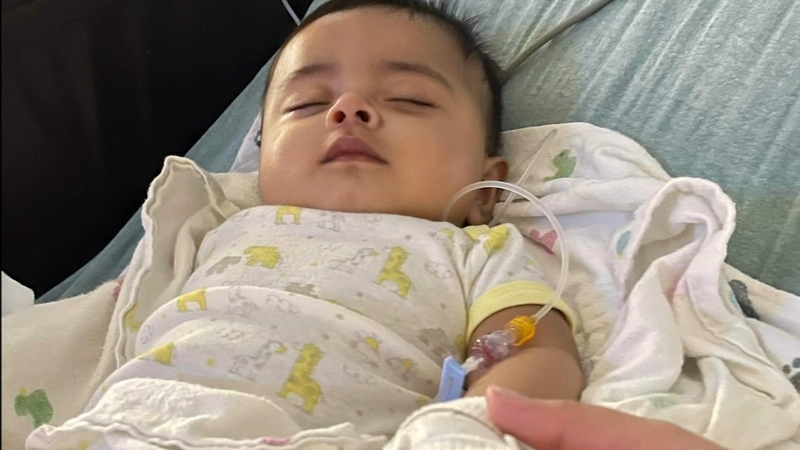 HOUSTON, Texas (KTRK) -- Parents are still throwing out certain cans of powder Similac infant formula after the FDA warned that it was connected to four cases of infant illnesses, including one death.

Days after the recall, one Houston-area mother had to rush her 6-month-old to the ER, and says it has been one of her worst experiences.

Ashley Jove knows babies tend to get sick, so when her son's pediatrician said it was probably nothing, at first, she agreed.

That was until 6-month-old Luca's symptoms lasted over three weeks, and got worse. Then, Jove heard about the Similac recall.

Parents should discard any affected formula, according to the agency.

"I freaked out and started checking all of his milk, and it was part of the recall," Jove said.

The FDA is warning consumers not to use certain powder infant formula made at the Abbott Nutrition Sturgis Michigan facility after four children became sick. One of the cases was in Texas.

The recall came after consumer complaints of Cronobacter bacteria, which can cause life-threatening infections such as sepsis or meningitis.

"He was extremely hot. He was like pale, like a yellow-pale. I don't know if it was because he was dehydrated," Jove recalled. "And then he started throwing up like gagging and throwing up."

Abbott issued the following statement:
"We are sorry to hear about Luca, and we hope he is doing well now. We value the trust parents and caregivers place in us, and ensuring the safety and quality of our products is our top priority. As part of Abbott's quality processes, all infant formula products are tested for Cronobacter sakazakii, Salmonella and other pathogens, and they must test negative before any product is released. No distributed product from our Sturgis, Mich., facility has tested positive for the presence of either Cronobacter sakazakii or Salmonella."

According to the FDA, symptoms of sepsis and meningitis in babies may include:

Cronobacter infection may also cause bowel damage, and may spread through the blood to other parts of the body, the FDA warns.

Through this experience, Jove wants other mothers to trust their instinct and stand up for the babies when they know something isn't right.

"You know, no matter what, push to make sure they test your babies. No matter what," Jove said. "Make sure everything is OK. It's better to be safe than sorry."

As for little Luca, Jove said he's now on the mend.

The FDA says you should not use any Similac, Almentum or Elecare formula with the following lot numbers: