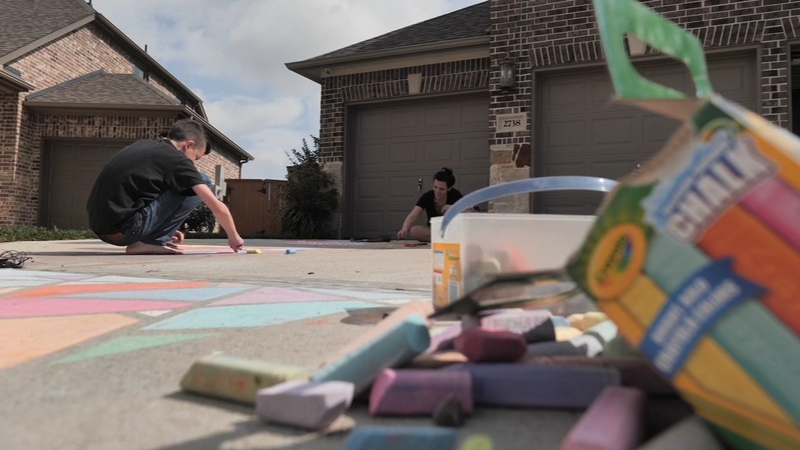 LEAGUE CITY, TX (KTRK) -- Across the world, many countries are putting restrictions on travel due to COVID-19. But the members of the Callaway family in League City are managing to stay connected in a creative way, even though they are thousands of miles apart!

Robert Callaway's wife and son are at home, but he's halfway around the world in Africa, working in oil and gas in Equatorial Guinea.

"He has flights booked for April 25th," said Shellie. "We're hopeful that he gets to keep those, but right now, in Equatorial Guinea itself, the government has restricted travel in or out of the country, regardless of citizenship."

To stay connected, Shellie and her son are sending love to Robert via the driveway.

"I have a former co-worker who is an amazing artist," said Shellie. "I saw on Facebook she had been doing some sidewalk drawings with her kids, and it made me realize that we had boxes of sidewalk chalk. As we were drawing, it occurred to me that Rob checks the security cameras every day, so maybe we could leave encouraging notes for him."

Every day, Shellie and her son have begun creating special messages in their driveway, in view of the security cameras.

"I actually messaged him and I said, did you check the cameras?" said Shellie. "When he saw them, he sent back crying emojis. It was really sweet."

They were even able to reveal some special news via sidewalk chalk, letting Robert know that he is a match to donate a kidney to Shellie's mother.

"Robert had gone through testing before he left through Methodist and we found out that he is a match," said Shellie. "She's waiting for a kidney. She didn't want to text him. She wasn't sure when she could really catch him. We started brainstorming how we could tell him and we decided to do it with chalk."

The Callaways say these last couple weeks have felt like a year, but these chalk messages are the bright point of their day.