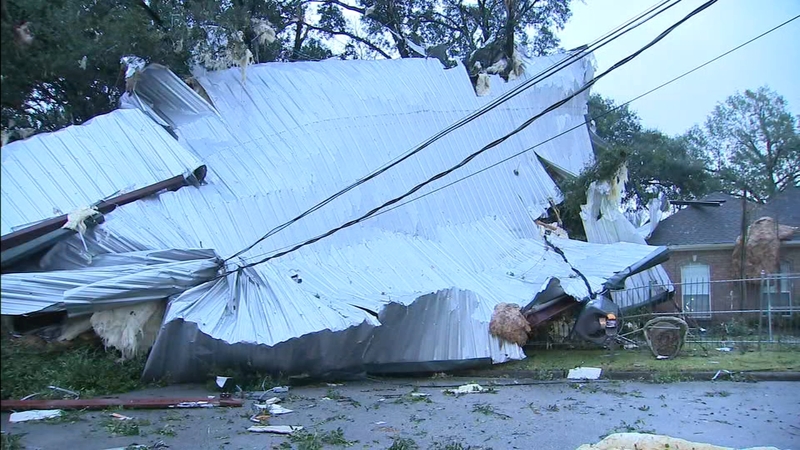 One of the hardest hit communities was the Humble area, where a tornado caused extensive damage.

Some of the worst damage ABC13 crews found was in a neighborhood off South Avenue F.

Video from the scene shows the entire metal roof of a business crashed into the road, with the business left in shambles nearby.

You can see footage of the storm damage in the video player above.

The roof of Infinity Fitness downed powerlines before resting in the roadway. It landed diagonally, hitting a couple of homes.

Video also shows other debris across the neighborhood, including insulation, wood, tree limbs and a misplaced air conditioning unit.

"Sounded like a freight train hitting a brick wall": In a neighborhood off South Avenue F, the entire metal roof of a business flew off and crashed into nearby homes.

A neighbor told ABC13 the metal roof barely missed the bedroom where he was sleeping.

ABC13 also spoke to the homeowner of one of the houses hit by the roof, who said his home sustained significant damage.

"I had been asleep until it hit. It just took it out. It messed up the other side there. It's got holes in the roof upstairs. And the wall, took out part of the concrete. Middle bedroom upstairs, got the top out of it," homeowner Mike Carr said. "Other than that, great shape. Nobody got hurt. That's the good thing."
Report a correction or typo
Related topics:
weatherhumblewater damageroof collapsewind damagetornadostorm damagesevere weather
Copyright © 2022 KTRK-TV. All Rights Reserved.
STORM DAMAGE
Harvey victim finally gets help 1,600 days after the storm
Some homes still damaged 4 years after Hurricane Harvey
7 tornadoes touched down in SE Texas in 1 weekend, NWS concludes
Leukemia survivor's Humble gym torn apart in tornado
TOP STORIES
Former HPD Chief Art Acevedo sues city of Miami after public firing
Winter returns after tonight's cold front passes
Texas AG Ken Paxton, who has fought vaccine mandates, contracts COVID
Baytown detective followed onto Highway 146 and shot at by 3 men
27-year-old accused of killing 19-year-old in Whataburger parking lot
Boyfriend accused of shooting 15-year-old girl 22 times posts bond
Biden, 1 year in, says nation weary from COVID but in a better place
Show More
Starbucks no longer requiring US workers to be vaccinated
TX college students confront anxiety, as 5th pandemic semester begins
Pearland and Friendswood drainage projects continue in 2022
French actor Gaspard Ulliel dies after ski accident
Teen dies after being shot while walking along Sims Bayou
More TOP STORIES News