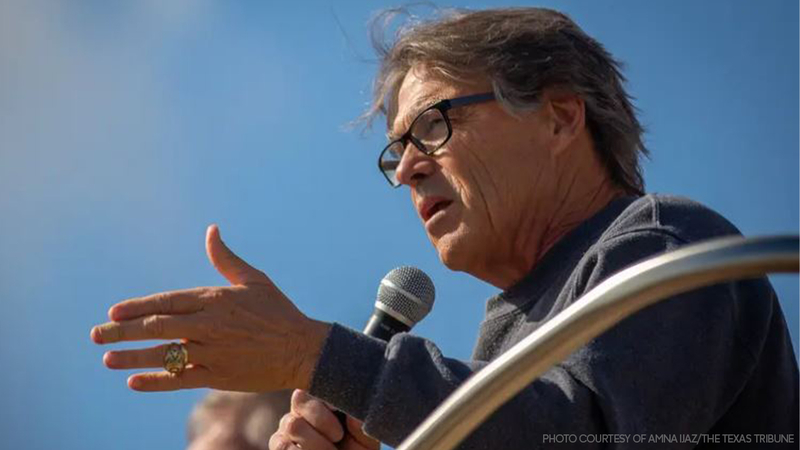 AUSTIN, Texas -- Rick Perry, in a rare return to policy debates in Austin, is teaming up with a Democratic state lawmaker to push for psychedelic drug therapy for veterans struggling with post-traumatic stress disorder.

The former Republican governor is throwing his support behind a bill by state Rep. Alex Dominguez, D-Brownsville, that calls for a clinical study of psilocybin - the active ingredient in "magic mushrooms" - to treat PTSD in veterans.

"To me, this may be one of the most hopeful pieces of legislation that the members of the Legislature have the opportunity to consider this session," Perry said in an interview Tuesday.

Some studies have suggested that psilocybin could be safe and effective in treating mental health disorders like depression, while calling for larger studies with more thorough methods.

Perry said he has "historically been a very anti-drug person" and still firmly opposes legalization for recreational uses. However, he said he has seen through his longtime advocacy for veterans how psychedelic drugs can provide relief to former service members who have exhausted other options - and are traveling to other countries, like Mexico, to receive treatment.

READ ALSO: How veterans can get career during the pandemic

"All of that properly done in the right type of clinical setting will save a multitude of lives," Perry said. "I'm convinced of it. I have seen it enough of these young men."

Perry was scheduled to join Dominguez for a news conference on his proposal Wednesday morning at the state Capitol. The news conference was slated to be attended by veterans that Perry has gotten close to over the years, including retired Navy SEAL Morgan Luttrell and Dakota Meyer, a Marine veteran and Medal of Honor recipient.

Dominguez's House Bill 1802 would direct the Health and Human Services Commission to conduct the clinical study of psilocybin in partnership with a health sciences university and a Veterans Affairs hospital. The proposal would also ask HHSC to do a literature review - a survey of prior studies - of using not just psilocybin but also MDMA and ketamine to treat PTSD in veterans.

READ ALSO: Non-profits come to the rescue to feed veterans and their families

HHSC would have to submit quarterly progress reports on its study, and it would have a deadline of Dec. 1, 2024, to deliver final findings to the the so-called "Big Three" - the governor, lieutenant governor and House speaker - as well as members in both chambers.

The bill was referred to the House Public Health Committee last month but has not received a hearing yet.

Texas has largely avoided loosening its drug laws in recent years as a growing number of states have legalized marijuana for recreational use. The state has legalized marijuana with limited levels of THC - the psychoactive ingredient in marijuana that makes people feel high - for people with certain debilitating illnesses, but eligibility is limited and relatively few people have signed up.

Noting the influence that the Big Three could have if they get behind a proposal, Perry said he's talked with the offices of Gov. Greg Abbott and Lt. Gov. Dan Patrick and that the speaker's office has been briefed on it. He added that he is hoping that Republicans can "get comfortable [that], 'Hey, this is not some recreational drug thing,'" but a life-changing treatment for veterans when handled carefully.

Dominguez said in an interview that he has found that colleagues on both sides of the aisle are "very supportive" of studying the issue.

"I think in general we're supportive of veterans issues and certainly there's maybe a generational discussion to be had. ... But I found most members want to hear the science," Dominguez said, emphasizing the study would go through a "controlled process" and that there would be "a number of safeguards in place to make sure that nobody abuses this and we learn the efficacy."

The lawmaker said his interest in the issue comes from his time as a prosecutor in Cameron County, which set up a veterans treatment court in 2014.

Perry has largely stayed out of state legislative matters since leaving office in 2015, unsuccessfully running for president in 2016 and then joining former President Donald Trump's Cabinet as energy secretary. He stepped down as energy secretary in late 2019.

But Perry is not unfamiliar with the Legislature, though, and particularly the House. He served there from 1985 to 1991 - first as a Democrat and then as a Republican.