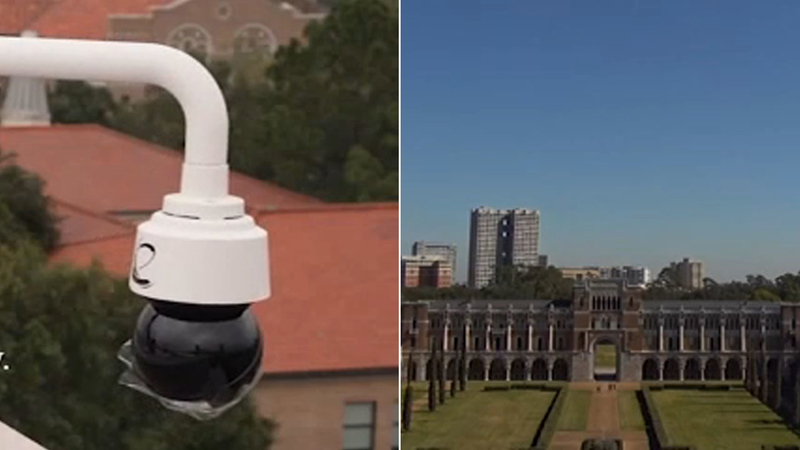 Rice's monthly 'streakers' at odds with camera fixed on quad

HOUSTON, Texas (KTRK) -- A new livestream camera showing off Lovett Hall at Rice University was set up during Christmas break. Since then, the camera has stirred up some controversy as students say they have safety concerns.

"It's not just that they are not communicating with us. It is also that they are minimizing and brushing off the safety concerns that we have," said Sammi Johnson, a senior at the university studying English.

Johnson said she would like to see the new addition to the roof of the Fondren Library taken down.

"The whole idea behind it was just to show off how beautiful Rice University is. That was the whole point," said Doug Miller, the director of news and media relations at Rice University.

"We talked to people at other universities who said when they did this at their universities, they got nothing but positive reaction," said Miller.

Miller also said he does not believe the camera poses any threat to student safety as the camera is six stories up and said you cannot make out people's features.

"I was joking that if Brad Pitt walked across the academic quad, nobody would recognize it from that shot. You simply can't recognize anybody from that shot," said Miller.

Johnson on the other hand is not convinced of that and is concerned the cameras will be used to potentially harm students.

"I know a lot of other students who have been sexually assaulted and abused on campus see it as a potentially dangerous piece of technology for anybody that has any sort of nefarious purposes," said Johnson.

Rice University junior Anna Rajagopal has safety concerns because of the camera too.

"My concern and the concern brought forth by a lot of other students was the fact that student safety is put at jeopardy with regard to sexual assaults, rapes, stalking, (and) these types of things when this camera is continuously monitoring us," said Rajagopal.

Both Johnson and Rajagopal also mentioned their concern about the statue of William Marsh Rice, the founder of the university, being included in what the school is calling a "beauty shot".

"We are focusing on a statue of a man who was not only a slave owner, but he was also part of the groups that were actually going after runaway slaves, and he made his campus that it was whites only and men only. What does it say that we are focusing on when marketing our campus?" said Johnson.

Other students also raised concerns about the cameras and Baker 13, a decades-old streaking tradition. University officials have since announced the camera will be disabled when the tradition takes place.

In response to concerns raised by a number of people, the new EarthCam will be disabled during Baker 13. As a reminder, the camera is six stories above ground & viewers do not have the capability to zoom in. No faces or identifiable characteristics are able to be seen. pic.twitter.com/L7Ti3meVJw

"It's not just the Baker 13 that's an issue. It's the overarching meaning surrounding the threat that it presents," said Rajagopal.

The Baker 13 tradition takes place on the 13th of each month. ABC13 spoke to the captains of the tradition and they said it is going on as planned Thursday night. They say to be safe, they will be running out of view of the camera this time and hope to return to their regular route next month.