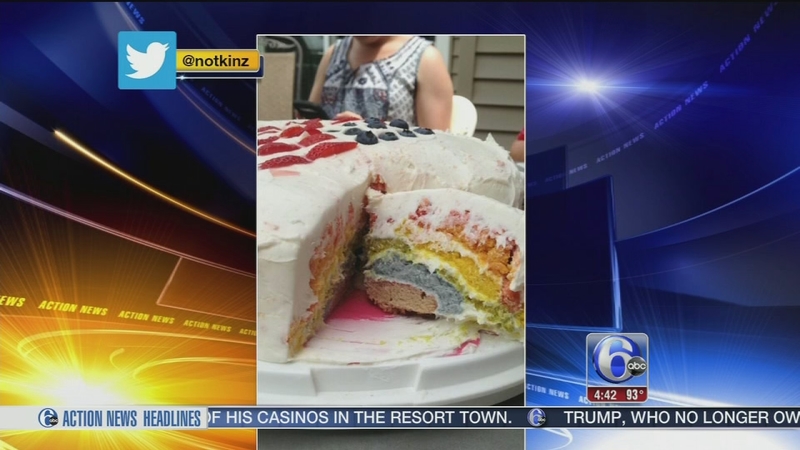 BUCKS CO., PA -- A colorful piece of rainbow cake has gone viral not only for what it stands for, but for what it means to one very grateful student in Bucks County.

The cake was part of a big party for a 17-year-old girl named Kinsey and was served at a coming-out party thrown by her parents.

Kinsey tweeted pictures of the party and the social media site's users have been so happy for her that they've been spreading the love faster than you can say funetti.

Kinsey says her parents decked the whole house in rainbows - from rainbow food to rainbow decorations.

She says people both in her life and at the George School, where she'll be starting her senior year in the fall, as well as people all over social media have been asking her for advice and sharing their own coming out stories.

She says in light of that mass shooting at the Pulse nightclub in Orlando, her family wanted her to know they are behind her and her decision.
Related topics:
societygayparentingsocial mediatrendingorlando mass shootingbig talkerstwitterlgbtviral
Copyright © 2022 WPVI-TV. All Rights Reserved.
TOP STORIES
Texas could move toward allowing HS athletes to cash in on deals
Mother, boyfriend charged after death of 8-year-old daughter, HPD says
Houston gets extra 'rose' after paying $240k to bring Bachelor to town
Authorities searching for 49-year-old Alvin man last seen May 19
Rain chances continue into the work week
Manhunt underway for woman connected to deadly love triangle
More than 75,000 pounds of baby formula lands in US amid shortage
Show More
Deputy crashes while chasing suspect in slingshot motorcycle
Student says he was told not to mention 'Don't Say Gay' law in speech
Businesses that help employees get abortions could be next target
Johnny Depp, Amber Heard trial: Kate Moss expected to testify
Trial continues for man charged in Spring couple's 2018 murder
More TOP STORIES News