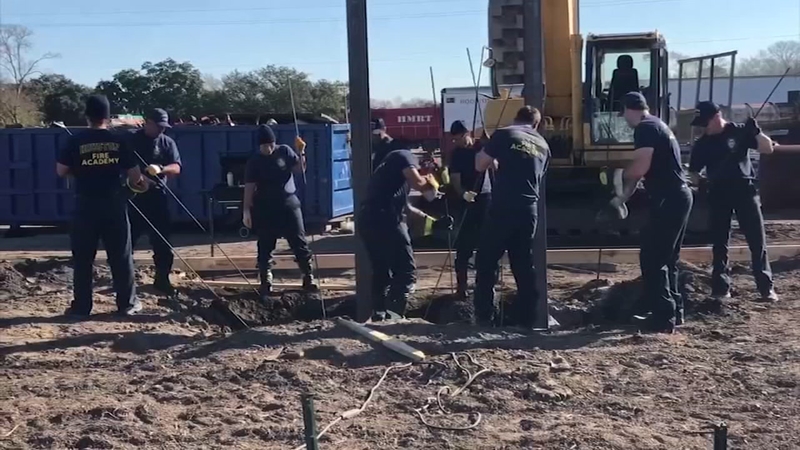 HOUSTON, Texas (KTRK) -- For just one shift, just a few hours at Station 7, in the midst of a two-month training program, Joel Duraso got to ride like a real Houston firefighter.

"I think we made like six or seven runs," Duraso said.

But it turned out to be the only runs he would ever get in what he hoped would be a career here.

"I saw my future as graduating the academy, going to a station, and learning from some of the best firefighters in the country," Duraso said.

Duraso, a professional firefighter for 10 years, quit his job, took a pay cut and enrolled at the Houston Fire Academy. But just when he thought he'd graduate, graduation was canceled. The 24 cadets were caught in the middle of a political fight over firefighter pay raises. After nearly three months of what appears to be at least some make-work projects, Duraso quit and went back to his old job.

What are the people of Houston getting for the money taxpayers spent to train Duraso?

"We're not in the practice of hiring people we don't need, so we do need them," Houston Fire Chief Samuel Pena said.
But they're still here at the academy.

Ted Oberg: "The mayor made this decision to keep them here?"

Pena: "The mayor has a decision whether to hire or fire. That's where we are."

After voters approved Prop B in November 2018, matching pay for police and fire, Mayor Sylvester Turner decided not to swear them in.

"It doesn't make any sense to keep hiring individuals in the fact of Proposition B," Turner said on Sept. 26, 2018, as he announced a hiring freeze for all but priority hires.

But since voters approved Prop B, the city has sworn in 73 new police officers who finished training after the hiring freeze started.

And Houston records show the city has hired 182 other full-time employees since Election Day. In Public Works, 65 new employees have been hired. The airport system hired 22 new employees. The health department, 19.

All in all, 17 different city departments have hired employees, despite the hiring freeze, all while those trained firefighters work to keep busy not doing the job they're trained to do.

Mayor Turner was not eager to hear questions from 13 Investigates' Ted Oberg, but when presented with the hiring told us, "how many exceptions were granted based on priority status? I can't really tell you, but there are certain considerations we take into account even though we are, we've been very conservative and filling positions are hiring individuals due to the budget constraints."

"The best and most efficient use of these resources is out in the field protecting the community," Pena said.

It cost Houston taxpayers upwards of $330,000 to train this group. That's more than $13,000 per firefighter. They won't grow the department. If sworn in, they would replace retirees.

City records show sworn firefighters earn thousands of your dollars in overtime pay every week. One way to cut that cost is to pay people to work regular shifts. That hasn't happened and by our calculations, keeping these firefighters at the academy where they can't put out fires or work on an ambulance cost the city of Houston nearly $152,000 since mid-November in overtime costs.

"We've had days where we're calling in 80 people on overtime due to sick leave or vacation or whatever," Pena said, adding there are some days without any. City records show the lowest ranking firefighters have accrued more than 30,000 overtime hours alone since November.

In Houston, fire cadets are paid roughly $27,000 a year. The cadets agreed to the pay, but were told the academy would last 2 months. They've now been at that pay rate for 5 months. Once they are deployed to a fire station, their pay would jump to at least $43,528 - more if they are EMT certified.

Late last month, Turner defended not moving these cadets to fire stations in case the city needs to lay off city staffers to pay what he says is a $100 million bill to pay firefighters the same as police officers.

"It would not be wise to bring on additional employees. For example, right now in the fire department, we might simply have to turn right around and let them go," Turner said in his Jan. 23, 2018 Mayor's report.

"Not at all," Duraso said. "Just the mayor's vindictiveness."

The city says it is easier to lay cadets off before they are sworn in than after. At the end of this month another class finishes training. There's no plan to deploy those 47 trained firefighters either.