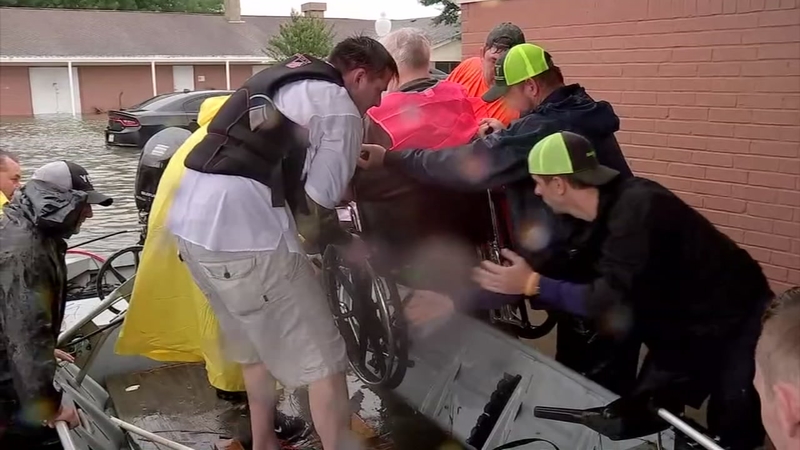 "They got me out in time," said long-time resident Cherry Johnson.

Johnson was like the many residents in Port Arthur who had to evacuate quickly from flooded homes. Johnson left with only a bag of her belongings.

"We were really caught off guard," said Michelle Andrews, another resident of the town. "It's a frightening feeling, because you think I'm going to have to swim out of here."

Andrews had more than a foot of water coming in from all sides of her home. She had to leave quickly too.

ABC13's Foti Kallergis meets with a Port Arthur resident who continues to rebuild her home after Harvey.

Months later, she invited us in to see the damage to her home and the progress that's been done.

"The only thing that we were able to salvage was those upper cabinets," said Andrews pointing out.

Andrews is one of the lucky ones in the rebuilding process. Contractors have already installed new drywall. They are weeks out from being done.

But not everyone is this far along in the process. Andrews said it was very difficult finding a contractor.

"We got fortunate," said Andrews. "They were on the next street. They came and did (neighbor) Hud's house. They did a good job, and we hired them for demo."

Andrews said there is a shortage of contractors. Getting one could take months. One street over, there are still debris piles that need to be picked up. We saw people living in campers. Their homes are still gutted out. This is where they will most likely spend the holidays.

"I think everybody is really resilient in this area. Everyone is helping people out, people that didn't have insurance. Friends and family are getting together and donating and helping them out," said Andrews.

Just about a block away from Andrews' home is the nursing home that gained national attention when it was being evacuated in late August.

"They were not allowed to be taken out," said Port Arthur police Det. Mike Hebert.

Det. Hebert was at the Lake Arthur nursing home when chaos broke out. He said he had to put the director in handcuffs.

"We knew very quickly that he was not going to be any help in this situation," said Det. Hebert.

In late September, Hebert executed a criminal search warrant that accused the director, Jeff Rosetta, of negligence and recklessness.

Rosetta has not been charged with a crime at this time.

"They had to be (taken) by boat. And the only boats we had were from these volunteers. That is the only way that these people were going to get out of here," said Hebert. "Every day I come through here, I think about what happened that day."

On August 30, the Army Reserve staged a medical evacuation for more than 150 nursing home patients from the Port Arthur area. The mission took about eight hours. Patients were transported in military helicopters to Montgomery County.

Some families are being represented by area attorneys.