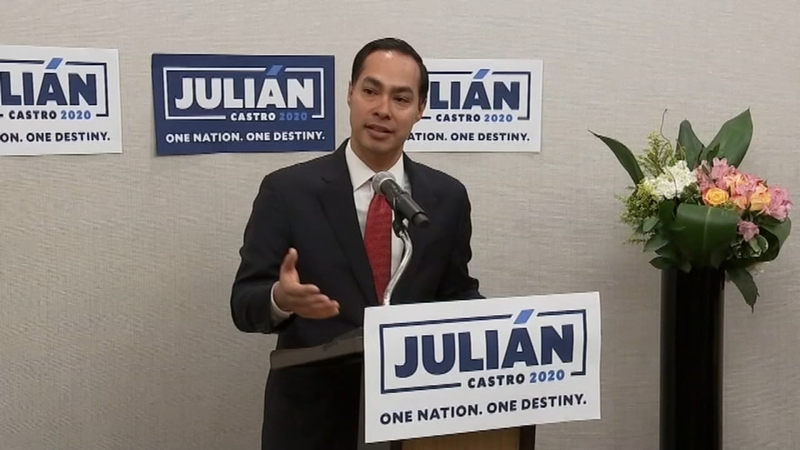 MIAMI, Florida (KTRK) -- Wednesday night is a chance for strong Democratic presidential candidates to solidify their position in their race for the White House.

It's also a chance for lesser-known hopefuls to gain traction and get much needed attention on a national stage.

Julian Castro was among the first to jump into the crowded pool of Democrats seeking their party's nomination.

Other candidates frequently cite him as the generator of policy and ideas with which they agree or that they adopt. But so far, he's not getting the lion's share of attention.

"Is it flattering or frustrating that you seem to put out ideas first and then other candidates typically get credit for them? As long as we still have plenty of time before people vote, it's flattering," Castro told ABC13 Eyewitness News. "We're gonna keep working at it little by little. What I've seen in this campaign is that more people are taking notice. "

.@JulianCastro looks forward to American people getting to know more about him, his experience, his ideas during debate tonight in Miami #abc13eyewitness pic.twitter.com/nvkpZlC29q

During a one-on-one interview, the former HUD secretary and San Antonio mayor said the first debate is a real opportunity for him to tell his story and shift the narrative.

Castro is one of two Texans on the stage Wednesday night.

Former El Paso Rep. Beto O'Rourke has more name recognition and a bigger war chest than Castro, but he believes he is the candidate who can win swing states like Florida and Texas once people get to know him and his ideas.

"I can beat Donald Trump for the right reasons," Castro said. "What are the right reasons? Because I have strong experience to be president. I'm one of the folks on the stage who has strong executive experience, a track record of getting things done. "

He acknowledges he might only get a few questions and he'll have to make the most of those moments.

Castro to speak in Houston on Sunday

Secretary Castro has a busy weekend ahead of him after the debate, including a stop in Houston.

Sunday, he will speak as part of the Harris County Democratic Party's Speaker Series.

For more information and $5 tickets to the event, click here.

.@Hickenlooper talking with media ahead of tonight’s democrat debate. pic.twitter.com/VIQDKS9C38