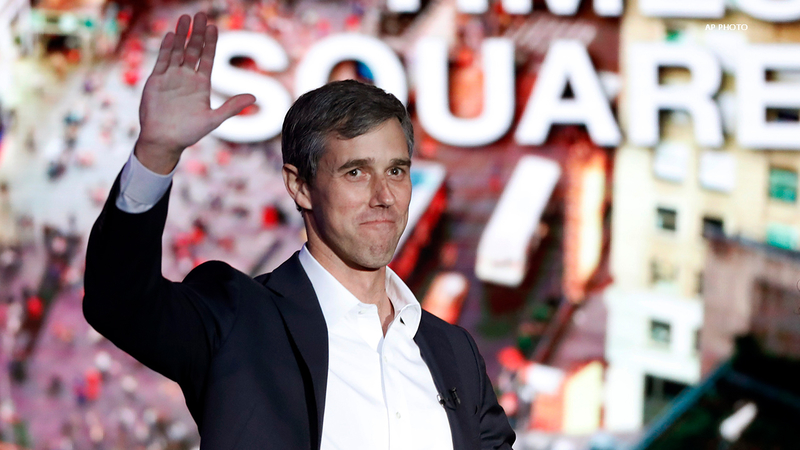 EL PASO, Texas (KTRK) -- After weeks of speculation, former Texas Rep. Beto O'Rourke finally announced Thursday that he is running for president in 2020.

O'Rourke, a Democrat, made the announcement in a video with his wife Amy by his side.

"Amy and I are happy to share with you that I am running to serve you as the next president of the United States of America," O'Rourke said.

I am running to serve you as the next president. The challenges we face are the greatest in living memory. No one person can meet them on their own. Only this country can do that, and only if we build a movement that includes all of us. Say you're in: https://t.co/EKLdkVET2u pic.twitter.com/lainXyvG2n

On Sunday, O'Rourke deflected questions about his presidential run during an appearance at the South by Southwest Music Festival in Austin for the premiere of the documentary about his 2018 senate campaign.

O'Rourke challenged incumbent Texas Sen. Ted Cruz in November, but narrowly lost to the longtime senator, who has held his seat since 2013. Since the loss, O'Rourke hadn't ruled out a potential 2020 bid but stayed mum about whether he'd actually run until now.

RELATED: What to know about Beto O'Rourke

The former congressman joins a packed field of Democrats who have already thrown their hats in the ring for the nation's highest office.

Speaking to reporters in the Oval Office Thursday, President Donald Trump says of the Texas congressman: "Well, I think he's got a lot of hand movement." Then he added: "Is he crazy or is that just how he acts?"

Former Colorado Gov. John Hickenlooper, Sen. Bernie Sanders, Sen. Amy Klobuchar, Sen. Cory Booker, and Sen. Kamala Harris are among the many Democrats who are making a bid for the White House.

Former Vice President Joe Biden has not yet announced whether he'll run.

Asked if he was more threatened by O'Rourke or former Vice President Joe Biden, Trump said: "whoever it is I'll take him or her on."

RELATED: Who's running for president in 2020? List of Democratic candidates

On the heels of his announcement Thursday, O'Rourke, 46, plans to make a series of stops in Iowa, which hosts the first caucuses of the 2020 presidential nominating campaign.

He'll be back in El Paso, his hometown, on March 30 for a campaign kickoff event.

WHO IS BETO O'ROURKE? HERE ARE FIVE FAST FACTS