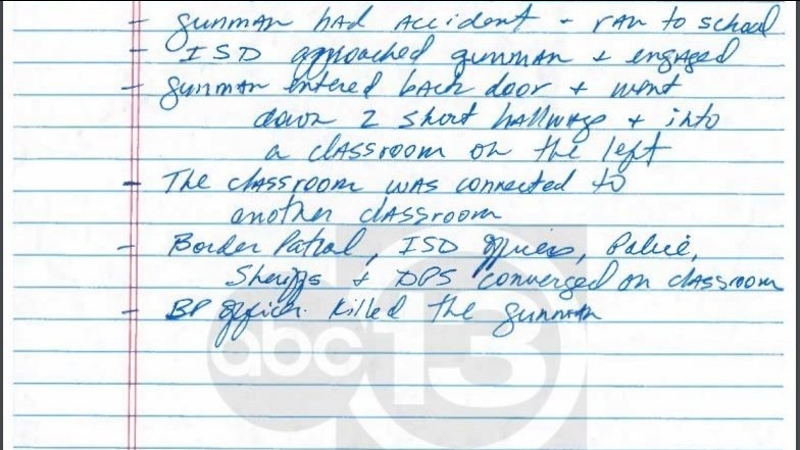 Handwritten notes show what Abbott was told after Uvalde shooting

HOUSTON, Texas (KTRK) -- Handwritten notes released to 13 Investigates on Monday reveal what Gov. Greg Abbott was told about the confusing police response after the May 24 mass shooting that killed 19 elementary school students and two teachers in Uvalde.

During a news conference after the shooting, Abbott initially told Texans officers went into Robb Elementary School to confront the gunman.

In a news conference three days later - after the Texas Department of Public Safety corrected the timeline by saying officers waited more than an hour before entering the classroom - Abbott admitted he was livid.

"I was misled. I am livid about what happened," Abbott said on May 27, according to a C-SPAN telecast of the news conference. "I was on this very stage two days ago and I was telling the public information that had been told to me in a room just a few yards behind where we're located right now. I wrote down hand notes in detail about what everybody in that room told me in sequential order about what happened and when I came out here on this stage and told the public what happened, it was a recitation of what people in that room told me, whether it be law enforcement officials or non-law enforcement officials, whatever the case may be and as everybody has learned, the information that I was given turned out, in part, to be inaccurate and I'm absolutely livid about that."

Under Texas law, 13 Investigates asked for the handwritten notes Abbott took himself and received them on Monday.

They do appear to back up Abbott's initial presentation that officers went in and the suspect was already "contained."

The notes also contain references that there was no forewarning, no mental health history and no criminal history for the suspect.

Still, at the initial news conference, Abbott told Texans the sheriff and mayor believe there is a problem with mental health in Uvalde. His notes outline a list of resources, including crisis teams.

Read Abbott's nine-page notes below - on a mobile device? Click here to open.

13 Investigates has also asked the Texas Department of Public Safety to release the interviews it conducted that day with officers while creating a timeline of what happened.

DPS is seeking to withhold that information, saying "revealing the marked records would provide criminals with invaluable information concerning Department techniques used to investigate and detect activities of suspected criminal elements; how information is assessed and analyzed; how information is shared among partner law enforcement agencies and the lessons learned from the analysis of prior criminal activities. Knowing the intelligence and response capabilities of Department personnel and where those employees focus their attention will compromise law enforcement purposes by enabling criminals to anticipate weakness in law enforcement procedures and alter their methods of operation in order to avoid detection and apprehension. Consequently, the Department believes the records should also be excepted from required public disclosure."