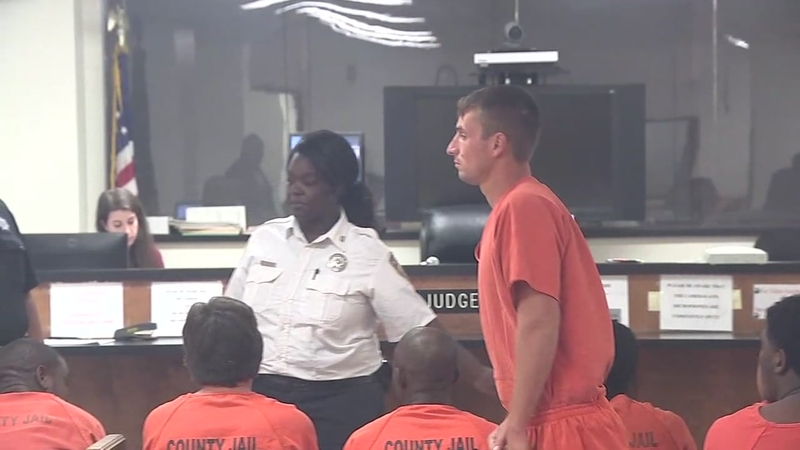 HOUSTON, Texas (KTRK) -- An ABC13 report about a fake cop targeting half a dozen pharmacies and stealing powerful painkillers, helped lead to the man's arrest.

It's a story we first told you about on ABC13 Tuesday night.

Travis Lee Wilson, 32, has been charged with robbing a Walgreens located on F.M. 2920, on Monday.

He's seen on surveillance video wearing a hat or t-shirt with the word "POLICE" written on them. In some cases, sources say he wore a bullet proof vest and told witnesses he was a DPS narcotics officer.

Video from the latest robberies at two Walgreens stores near the Harris County/Montgomery County line made national news.

ABC13 was the only station there when Wilson was taken in to central booking early Thursday morning. He was in handcuffs and kept his head down as police took him in for questioning.

Authorities say an Eyewitness News viewer saw the initial ABC13 report on the robberies and called the police, leading to the man's arrest.

The first robbery happened in September at a pharmacy in Friendswood. ABC 13 has exclusive video showing Wilson pulling up to the store in a navy blue Ford Expedition, casually walking in and handing a piece paper to the pharmacist. The pharmacist tells Eyewitness News that a list of drugs was on that paper, with oxycodone at the top.

The pharmacist says Wilson said, "Don't try anything. I'll blow your brains out."

The pharmacist can be seen handing Wilson a bottle of pills. Wilson then calmly leaves.

The robbery lasted less than 60 seconds.

Investigators connected Wilson to a robbery that happened on Monday at a Walgreens in Spring.

According to the sheriff's office, a vehicle tied to one of the robberies was located in the Alvin area. Law enforcement moved in and arrested Wilson after a witness positively identified him in a photo lineup.

Authorities searched Wilson's Ford Expedition and found a black shirt with "POLICE" written on it, a fake plastic badge and a toy gun. Investigators also found several patches of Fentanyl in Wilson's apartment, which investigators believe were taken in the Walgreens robbery.

A witness told authorities he recognized Wilson as a man pretending to be a police officer during Hurricane Harvey. The witness said Wilson told people to leave their homes when they didn't need to evacuate. Looting may have been a motive.

Wilson was in court for the first time Thursday morning, 10 hours after his arrest. He's in jail being held on no bond.