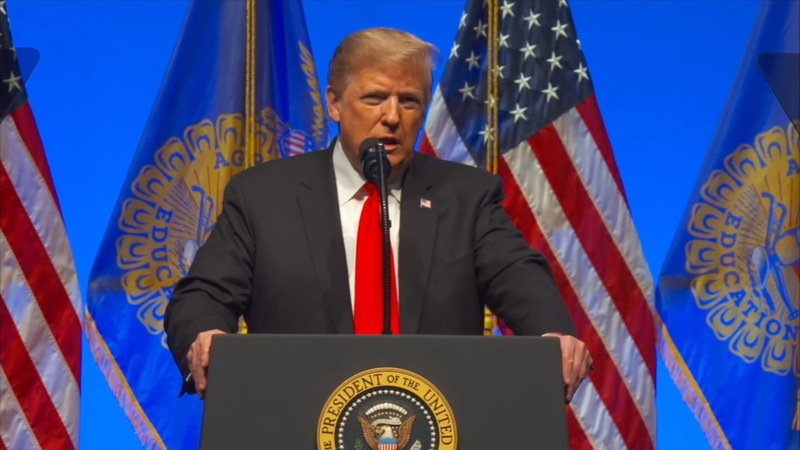 President Donald Trump on Saturday lamented the "devastating" attack by a shooter on a Pittsburgh synagogue, saying it lays bare the "hate in our country" and speculating that the death toll - " a lot of people killed" - would have been curbed if the building had had an armed guard.

With both the number of deaths and details of the synagogue's security still to be disclosed, Trump said gun control "has little to do with it" but "if they had protection inside, the results would have been far better."

Trump responded before boarding Air Force One for a speech in Indiana and commented upon his arrival.

Richard Cohen, president of the Southern Poverty Law Center, is deploring "another horrific act of hate at a house of worship."

We are devastated. Jews targeted on Shabbat morning at synagogue, a holy place of worship, is unconscionable. Our hearts break for the victims, their families, and the entire Jewish community.

Anti-Defamation League CEO Jonathan Greenblatt has tweeted: "We are devastated. Jews targeted on Shabbat morning at synagogue, a holy place of worship, is unconscionable. Our hearts break for the victims, their families, and the entire Jewish community."

I was heartbroken and appalled by the murderous attack on a Pittsburgh synagogue today: pic.twitter.com/NBMO31lMU2

"I was heartbroken and appalled by the murderous attack on a Pittsburgh synagogue today," Netanyahu said in a video message posted on Twitter shortly after the attack, which has killed at least two people and injured six.

Netanyahu says all of Israel is grieving with the families of the dead.

Other public figures took to social media to share their condolences:

This is an absolute tragedy. These senseless acts of violence are not who we are as Americans. My thoughts right now are focused on the victims, their families and making sure law enforcement has every resource they need.

We must all pray and hope for no more loss of life. But we have been saying “this one is too many” for far too long. Dangerous weapons are putting our citizens in harm’s way.

And in the aftermath of this tragedy, we must come together and take action to prevent these tragedies in the future. We cannot accept this violence as normal.

Monitoring reports of shooting at Tree of Life Synagogue in Pittsburgh. Praying for the fallen, the injured, all the families impacted, and our courageous first responders. God bless them all.

America is stronger than the acts of a depraved bigot and anti-semite.

All good Americans stand with the Jewish people to oppose acts of terror & share the horror, disgust & outrage over the massacre in Pittsburgh.
We must unite against hatred & evil.

My heart breaks over the news out of #Pittsburgh. The violence needs to stop. May God bless, guide & unite the United States of America.

My heart breaks for this community. Praying for our friends and neighbors at the Tree of Life affected by this horrendous hate crime. Grateful to the Pittsburgh police for their prompt response.

I’m closely monitoring the situation in Squirrel Hill. I’m praying for all those impacted and thankful to our law enforcement officers who responded. Our state and nation will stand with the Tree of Life Synagogue along with the entire Pittsburgh community.