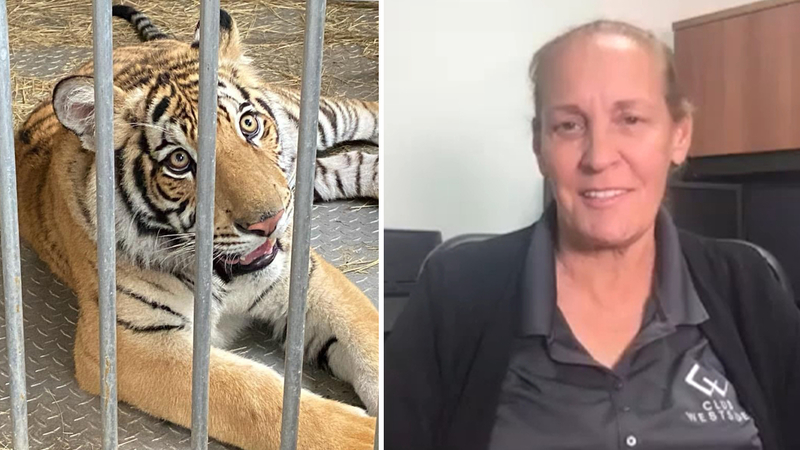 What's next for India the tiger after weeklong fiasco?

HOUSTON, Texas (KTRK) -- Linda McIngvale, who runs the health and fitness facility Club Westside and is married to Mattress Mack, is explaining how she helped facilitate the safe transfer of India the tiger to Houston authorities over the weekend.

The tiger disappeared for a week after it was first spotted roaming a west Houston yard last Sunday in a now-viral video.

What has unfolded since sounds like nothing short of a movie.

The suspected owner of the tiger, Victor Cuevas, is facing charges for a 2017 murder in Fort Bend County, but is now back in jail on a $300,000 bond.

"Well, I mean, number one, you want the tiger to get in good hands. A tiger shouldn't probably be ever in somebody's home, and it needed to go to the sanctuary. But also because I think that the kids, I call them kids because they're young, I think they really love the animal and wanted the animal to be in a nice, safe place, and I think they were probably nervous and scared, and I think they trusted me enough to feel like I could facilitate it for them," McIngvale told ABC13.

She said she and the couple are acquaintances, having met them when they were a guest of some friends at her club. McIngvale added they also share a love for animals, with her giving them two Capuchin monkeys.

"We have two Capuchins we were trying to move, and I let them have them. That's how they knew I had some sort of relationship with them, that's how the city knew that," McIngvale said, explaining that those types of monkeys are legal to have in the city if they're under 20 pounds.

But when it comes to owning a big cat, she said she advised the Cuevases that's a no-no.

McIngvale is familiar with exotic animals.

She has what are called "animal ambassadors," where club members can have hands-on feeding experiences and learn more about animals. But the difference, she said, is they are a facility properly licensed to handle them.

"We have a USDA license, and obviously, we're exhibitors at our club, and we have a full-time staff of 10 to 12 people to work with our mammals. You don't have that when you're in a home," she said, adding she loves primates, but has never owned them individually.

McIngvale said she believes the Cuevases truly loved India, who was found healthy and unharmed, and had been discussing taking him some place safer, like a sanctuary.

Linda McIngvale said she and the Houston couple who had a missing tiger are acquaintances. Here's how she helped get that tiger over to authorities.

What's next for India the tiger?

India was transferred from BARC Animal Shelter and Adoptions in Houston to the Cleveland Amory Black Beauty Ranch in northeast Texas Sunday morning. The tiger received a medical evaluation after Gia Cuevas handed the animal over.

Noelle Almrud, the senior director of the ranch in Murchison, Texas, said the ranch is one of the largest and most diverse sanctuaries in the United States. It's been in operation since 1979.

She said the tiger will be introduced to a naturally-wooded habitat with a pool, trees and a proper, nutritious diet after it goes through a 30-day quarantine to ensure it's not carrying any diseases or viruses that could affect other animals.

"I just wanted to get the tiger here. He was in a very small crate, when he was brought to us, and as you can tell he's in a much bigger crate now and he seems to be doing fine," said HPD Major Offenders Commander Ron Borza over the weekend. "In no way, shape or form should you have an animal like that in your household. That animal is only nine months old and already weighs 175 pounds, full grown. That animal can get to 600 pounds, it still had his claws, and it could do a lot of damage."

The ranch said it's obvious India had been handled by humans. The tiger was described as being calm.

The facility also said it can cost anywhere between $10,000 to $20,000 per year to care for a tiger in sanctuary or zoo setting once you factor in food, supplies, utilities, construction and veterinary care.

Carole Baskin, who starred in the true crime documentary, "Tiger King: Murder, Mayhem and Madness," said she doesn't think India will have a problem acclimating to his new environment, but warned again about why private individuals should not be raising them.

"Most people give cats up before they reach nine months of age because by that time you see how big they are," Baskin said. "They think it's going to be fun, and it's going to be like having a dog, and it's nothing like having a dog. That's what the breeders and dealers tell them...'Oh, raise it in the house. It'll be like a pet. No, it'll be like a tiger. That's what they grow up to be."