EMU ON THE RUN! Officials searching for escaped large bird 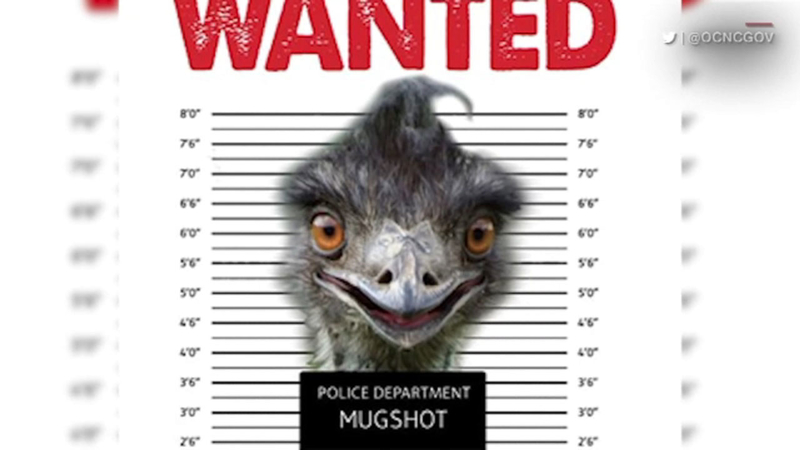 Authorities made a hilarious mug shot of the large bird, dubbed "Eno."

Eno has been on the loose for at least five weeks.

There have been sightings in at least two counties, but no one's been able to capture it.
One eyewitness reported spotting the emu just moments before it jumped on their car.

Officials say Eno is docile, but they're warning residents to keep their distance.

"Do not attempt to chase him, capture him, handle him," explained officials. "If you corner him or make him feel defensive, he could be dangerous."
Report a correction or typo
Related topics:
pets & animalsnorth carolinaanimal rescuecnnanimal
TOP STORIES
Houston gets extra 'rose' after paying $240k to bring Bachelor to town
Authorities searching for 49-year-old Alvin man last seen May 19
Rain chances continue into the work week
Mother, boyfriend charged after death of 8-year-old daughter, HPD says
Manhunt underway for woman connected to deadly love triangle
More than 75,000 pounds of baby formula lands in US amid shortage
Deputy crashes while chasing suspect in slingshot motorcycle
Show More
Student says he was told not to mention 'Don't Say Gay' law in speech
Businesses that help employees get abortions could be next target
Johnny Depp, Amber Heard trial: Kate Moss expected to testify
Trial continues for man charged in Spring couple's 2018 murder
Driver who ran stoplights in fatal crash charged, HPD says
More TOP STORIES News