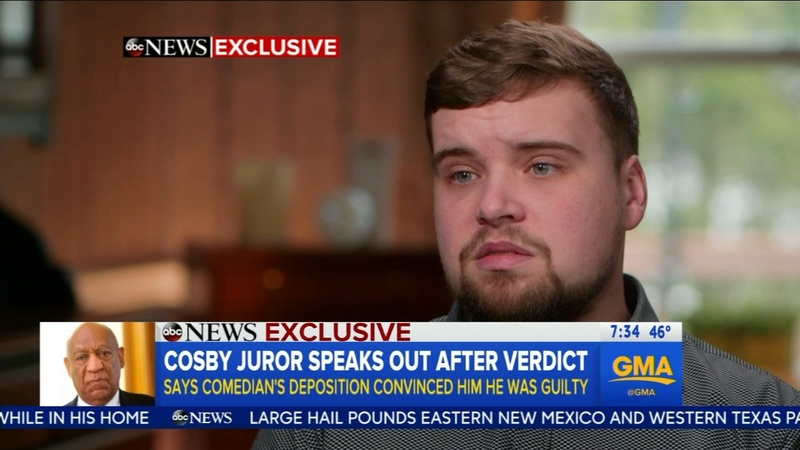 A juror on the Bill Cosby sexual assault retrial case spoke exclusively to ABC News days after the comedian was found guilty.

The juror, 22-year-old Harrison Snyder, revealed that it may have been Cosby's own words that sealed his fate.

"What was the evidence that made you sure beyond a reasonable doubt that he was guilty?" ABC News reporter Linsey Davis asked.

"I think it was his deposition, really. Mr. Cosby admitted to giving these Quaaludes to women, young women, in order to have sex with them," Snyder said.

Snyder, who was juror number 1, said when he first entered the deliberation room, he was not sure Cosby was guilty.

"So what made the difference for you once you started deliberating," Davis asked.

"Hearing everyone's comments about certain pieces of evidence and going through the different counts," Snyder said.

"So you don't feel even now that it was an open and shut case?" Davis asked.

The 22-year-old juror says prior to the trial, he didn't know much about Cosby and knew nothing about the allegations against him.

"What did you know about the allegations prior to becoming a juror in the case?" Davis asked.

"I didn't know anything. I don't watch the news ever. So I didn't even know what he was on trial for," Snyder said.

At Cosby's first trial last spring, the jury deliberated for more than 52 hours, but was unable to come to a unanimous decision on whether or not Cosby drugged and sexually assaulted former Temple University employee Andre Constand at his Cheltenham Township, Pennsylvania home in 2004.

Bill Cosby guilty on all charges in sexual assault retrial. John Rawlins reports during Action News at 6pm on April 26, 2018.

Snyder said when Constand was on the stand, he believed her. He also believed the other five women who testified.

"If you hadn't heard from the other five, and you just had her word, would that have mattered to you?" Davis asked.

"I don't think so because in the deposition, he stated that he gave these drugs to other women. I don't think it really necessarily mattered that these other five women were here. Because he said it himself that he used these drugs on other women," Snyder said.

"So you found it to be his words that were the most damning of all?" Davis asked.

While many in the court of public opinion felt the #MeToo movement loomed large, perhaps helping to sway the jury, Snyder said that was not a factor.

"I really only found out about it after I got home. Then I looked online to see what everything was. I didn't really even know about the #MeToo movement," Snyder said.

Snyder described the jury as being all on the same page when it came to arriving at that unanimous guilty verdict on all three counts.

Snyder said there was no dissension or tension in the jury room.

"Sitting here today, is there any doubt in your mind that you guys came to the right conclusion?" Davis asked.