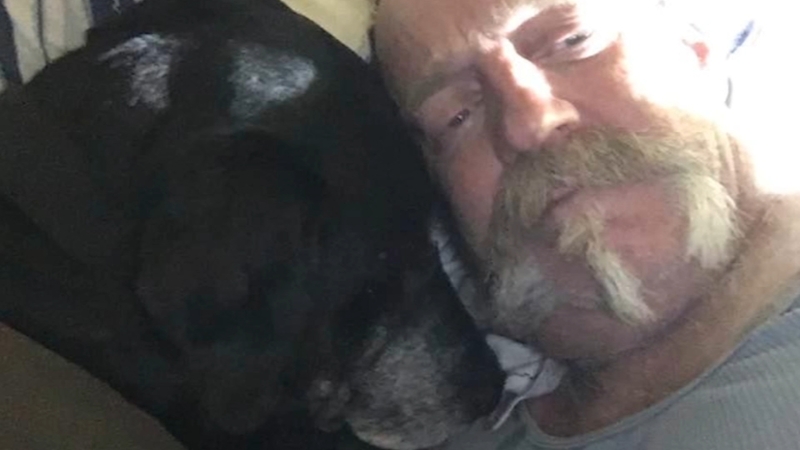 PEARLAND, Texas (KTRK) -- A Pearland man is looking for the stranger who helped him through one of the worst days of his life without saying a word.

At the start of the year, J P Groeninger was confronted with the decision all pet owners dread: making the hard decision to end suffering and provide a peaceful end.

"She couldn't really walk and was having terrible stomach issues. It was time," said Groeninger of his beloved dog Gracie.

She was his faithful companion for 13 years and was by his side as he went through a divorce, then battled what he was told was terminal cancer.

"She could bounce around when she sensed I need to perk up," he said. "When I was going through [chemo therapy,] she would cuddle with me, as if to say, 'You're not going anywhere.'"

A few months ago, Groeninger took Gracie to the Houston Humane Society and asked that she be put out of her suffering.

"It was for the best," he said. "But it was gut-wrenching to lose her."

"I held it together when I left," he said. "Then I got to my truck and started crying."

A moment he said he'll never forget happened next.

"I was sobbing and I felt a hand touch my arm," Groeninger explained. "I looked up I see the face of this woman who had so much compassion on her face. She would pat my arm, and just stood there, allowing me to grieve. Then she turns around and I never saw her again."

Now, he wants to meet her.

Groeninger posted the touching story to a Facebook group dedicated to Pearland residents.

He's hoping she might read it or she might have told someone about the day who could provide a clue.

"It wasn't until later I realized the deep, deep impact she had on me," said Groeninger. "I realized I'd been visited by an angel, and even if I never meet her again, I'll pay it forward with someone else who needs help."

If you're thinking of adopting a dog, make sure you're ready to give Fido the home he deserves!