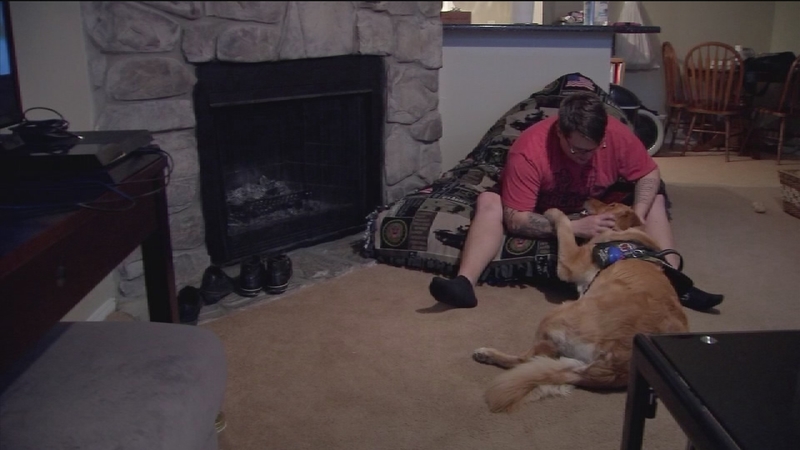 GATESVILLE, TX (KTRK) -- Behind the bars of prison units in Texas, inmates are changing the lives of veterans one dog at a time.

Inmates who participate in the Patriot Paws program train service dogs that go on to live with veterans with PTSD and physical disabilities from the war.

The scars of war are not visible on veteran Carl Scarborough, but he battles them every day.

"I saw an end to my life and not wanting to be here anymore," Scarborough said.

The war veteran left the Army after 5 years in Iraq and Afghanistan after being diagnosed with PTSD and a traumatic brain injury. He says some of his war buddies eventually took their own lives.

His salvation came in the form of a Golden Retriever appropriately named Angel.

"There was a void in my life that needed to be filled with something before I became that number, that statistic," Scarborough said.

Angel calms him with the touch of a paw, helps him sleep, and gets him out in the world. Angel received part of her training behind bars at various Texas prisons, just like all of the other dogs in the Patriot Paws program.

Some of the dogs are bought with donations, others are donated by breeders, and the rest are taken from shelters. They are trained to do everything a veteran needs from opening a refrigerator and retrieving a drink to picking up a prosthetic limb.

The dogs are trained for a couple of years by trainers who tested and selected from a pool of applicants.

"I know we're actually working to improve the quality of life for another individual. People who are not in prison rarely get that opportunity, so the fact we get it is just amazing," said trainer Lark Goode.

It is a $30,000 investment per service dog, and the recipient pays nothing. The waiting time for a veteran to receive a dog is 2 to 4 years, and that is what keeps Patriot Paws founder Lori Stevens up at night.

"I cry. I have nightmares I won't be able to give vets one of these dogs fast enough," Stevens said.

There are 60 dogs in training now, and Scarborough got his in the nick of time. He is going to school and hopes to be a veterinarian one day. For now, he has his Angel without wings, but instead with conditional love.

"Slowly but surely, I'm able to go places. I don't need to watch my back because that's what she's doing," Scarborough said.