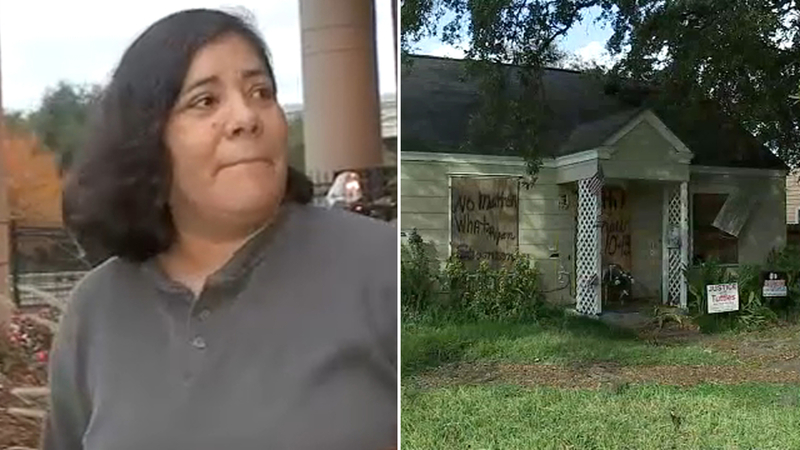 HOUSTON, Texas (KTRK) -- Already facing a possible federal prison sentence, the woman accused of making a false 911 report that led to the botched raid at her neighbors' home walked out of federal custody Thursday.

Three weeks after the report to police, narcotics officers executed a "no-knock" warrant on the home of Rhogena Nicholas and Dennis Tuttle.

As she walked out of custody in downtown Houston, Garcia was met with an ABC13 crew who asked her whether she was jealous of Nicholas. She said nothing on camera.

You can watch Patricia Garcia's release, as captured by Eyewitness News, in the video above.

Earlier in the day, Garcia's on-again, off-again boyfriend, Robert Antu, told ABC13 that he believes she was jealous of Nicholas, and that was part of the motive for the fake 911 calls.

Just the day before, the woman's ex-husband, Ray Garcia, also said his former wife could be vindictive.

On top of that, other neighbors along Harding Street said Patricia was a troublemaker.

According to Patricia Garcia's indictment, she called 911 and claimed her 25-year-old daughter was inside the Nicholas and Tuttle's home doing drugs. Ray Garcia and federal prosecutors said none of it was true.

"She (their daughter) was with me when all that happened and she got called to court down there and all that, saying they said my ex-wife had said her daughter was there or something, but she wasn't even there," said Ray.

Miya Shay explains the charges against the two former HPD officers, and now a 911 caller, at the center of a raid that killed a Houston couple.