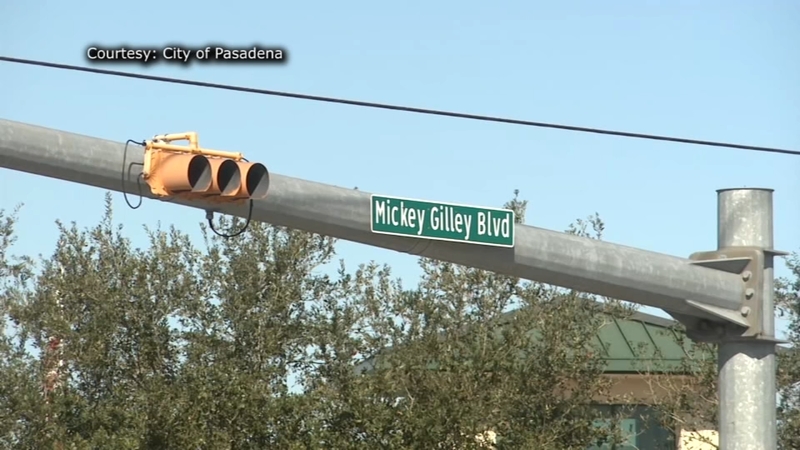 On Friday, the city renamed a section of Pansy Street as Mickey Gilley Blvd. The stretch of road is between Crenshaw and Old Vista.

Video shared by the city showed city workers putting up the new sign.

Mickey Gilley helped make the city of Pasadena famous when the "Urban Cowboy" featured Gilley's old night club. The movie starred John Travolta and Debra Winger. The cult classic helped reignite Gilley's career, who played himself, but the club was the real star in the film.

"I never dreamed they would do it, but we signed off for them to use the club," said Gilley said in a June 2020 interview with ABC13's Dave Ward. "The next thing I knew, the Paramount trucks were pulling into the parking lot. Mr. Cryer made them shoot the film during the day and they had to cover the windows and all the doors and got it black curtains to keep the light out. All the extras in there were pumping smoke in to make it look like a night scene."
Report a correction or typo
Related topics:
arts & entertainmentpasadenamoviesmusicarts & culturemusic news
Copyright © 2022 KTRK-TV. All Rights Reserved.
TOP STORIES
Preacher reaches out to suspect who stole from his church twice
Carjacking suspect threw 3-year-old out of truck, mother says
Officer shoots suspect in northeast Houston, HPD says
Here's why we're increasing rain chances and rainfall amounts
Fifth Ward residents upset over Union Pacific campaign donations
Expert weighs in on when you can buy a car amid chip shortage
Lina Hidalgo suggests DA could have her 'indicted' as political ploy
Show More
Santa Fe librarian still trying to make sense of high school shooting
Houston janitors fight for an increase in hourly pay
Police have no leads on skeletal remains found nearly 6 months ago
Houston Dash standout expresses excitement on equal pay decision
18-year-old arrested in shooting death of man with cane, HPD says
More TOP STORIES News