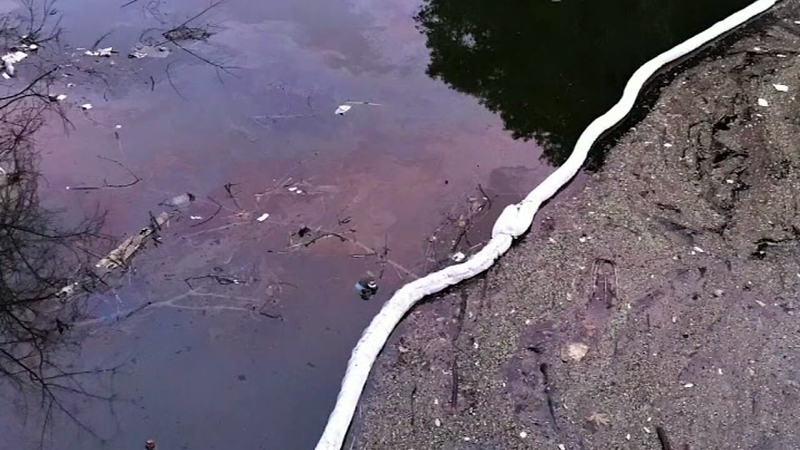 HOUSTON, Texas (KTRK) -- For nearly a week, crews have been working to contain a huge fuel spill along Sims Bayou. An estimated 64,000 gallons of jet fuel leaked from a fuel farm at Hobby Airport on Feb. 3. The cause is thought to have been a pump malfunction.

According to the city aviation department, the fuel stored for Southwest Airlines by its fuel partner, made its way into a storm sewer. Over the course of a day, it poured into the bayou.

Booms are now stationed along the waterway. One is visible from the deck of the Audubon Nature Center on Sims Bayou.

"We usually have wood ducks in the water, as well as egrets and herons," said Mary Anne Weber, with the center. "I haven't seen any since Monday."

The smell of hydrocarbons was so strong initially, that she said it impacted student tour groups. Cooler weather helped with the odor and the fumes, but the scent still lingers. She was also concerned about the possibility the fuel could ignite.

The bayou is habitat to hawks and owls. Bald eagles have also been seen in the area. More than 100 species of birds are native to the southeast Houston bayou. Mammals include river otters, which have been spotted in the past.

"The longer it sits, the better chance there could be damage to wildlife and the environment, and there are people who fish along the bayou regularly," said Weber.

The cleanup and containment is being done by SwissPort, the fuel vendor for Southwest. In a statement from Southwest Airlines, the fuel escape was said to be the result of a pump malfunction.

"We have no evidence of any immediate impact to wildlife," the statement read.

Weber hopes that is the case, but she is not convinced. It's what's beneath the sheen of the fuel that concerns her.

"We may not know the full impact for some time," she said.