Video shows several angles as the man shot at officers outside the home of the family police say he threatened to kill.
KTRK 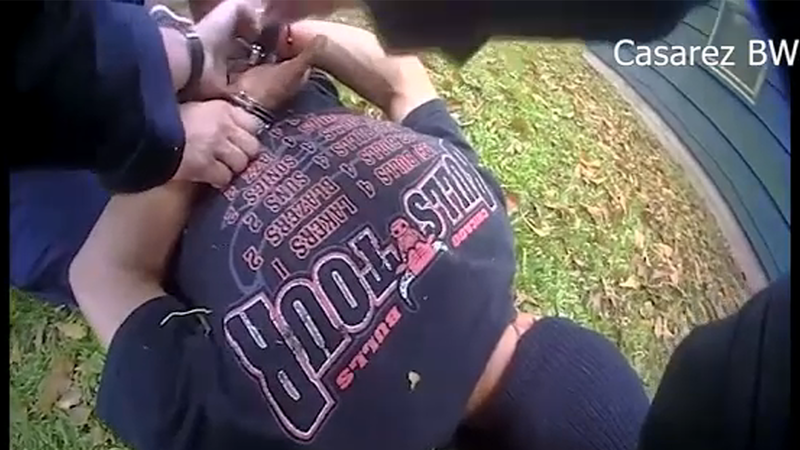 HOUSTON, Texas (KTRK) -- Newly-released video shows the chaos when Houston Police Department officers exchanged fire with a suspect who police said threatened to kill his family members at a home on the city's east side.

At about 1:15 p.m., officers responded to a family disturbance call, but by the time they arrived at the home, Limon was no longer there.

HPD commanders & PIO are en route to an officer-involved shooting in 10200 block of Valencia Dr in NE Houston.

Prelim info is HPD officers discharged weapons, striking an armed suspect who fired at officers. Suspect was taken to hospital. No other info at this time. #hounews pic.twitter.com/a4es9hy8eV

HPD Assistant Chief Ban Tien said officers spent approximately 45 minutes at the scene trying to find Limon when they noticed the man's vehicle driving back toward the house.

During an attempt to stop Limon, the man reached out the vehicle's window and waved a gun, according to Tien. Limon refused to stop, leading officers on a two-minute chase.

On his way back toward his family member's house, newly-released video shows Limon jump out of the vehicle and fire shots at the officers.

These are the weapons used by the suspect against our officers. The damage to the patrol vehicle can be seen on the windshield and on the roof near the light bar. Thankfully, our officers were not injured. #HouNews https://t.co/qv7K3nV3M4 pic.twitter.com/bP99tAG2Lc

Three officers returned fire, but none of them were struck.

In the video, officers can be heard asking where Limon went because they no longer had sight of him. Body camera footage then shows officers running toward the side of a home, where Limon is seen lying on the ground.

In response, Limon says, "I can't. You shot me right here."

HPD said Limon sustained a gunshot wound to the abdomen.

Video shows an officer immediately rendering aid before Limon was rushed to the hospital. He underwent surgery and is now in jail, according to court documents.

Limon is expected back in court Feb. 2.