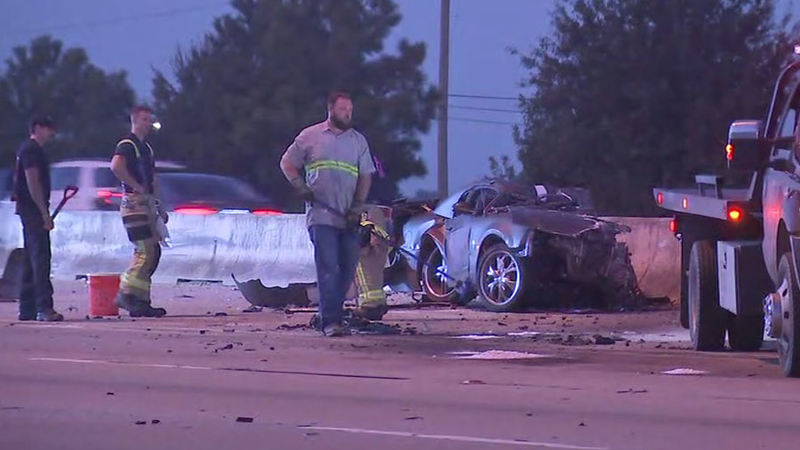 HOUSTON, Texas (KTRK) -- A wrong-way driver is dead after a crash with an 18-wheeler early Monday morning, shutting down the North Freeway at Spring Stuebner. The mainlanes have since reopened.

Debris was scattered all over the northbound lanes. Diesel fuel is also on the freeway.

The Harris County Sheriff's Office says the driver of a Ford Mustang was headed southbound in the northbound lanes, when he slammed into the 18-wheeler.

Authorities say they first received calls about the wrong-way driver around 2:43 a.m., about 90 seconds before the collision happened.

Officials are still investigating where exactly on the freeway the man began driving the wrong way. Police tell ABC13 some of the first calls they received were around the location of I-45 and FM 2920.

Eyewitness News reporter Jeff Ehling is on the North Freeway, where a wrong-way driver crashed into an 18-wheeler.

The driver of the big rig was going 45 mph, according to Sgt. Dashana Cheek-McNeal with HCSO.

She says the site of the crash is at a slight slope. When the 18-wheeler's driver got to the top of it, he saw the Mustang's headlights and tried to avoid it, but the Mustang continued in his direction and they crashed in the HOV lane.

The driver of the 18-wheeler was not injured.

Deputies are investigating whether alcohol was a factor.

Heavy wrecker now hooked up to 18 wheeler involved in the wrong way driver fatal accident on I-45 north. pic.twitter.com/QbSC3MAynL