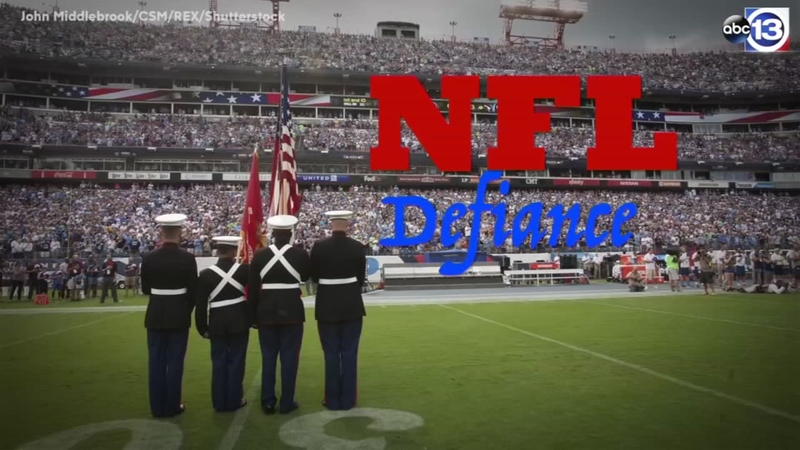 The Associated Press observed more than 200 players around the NFL kneeling or sitting during the national anthem on Sunday.

The highest total was in Washington before the nationally televised night game, where nearly the entire Oakland Raiders team protested, in addition to six Redskins. No one sat or knelt at the Pittsburgh at Chicago game, although the Steelers stayed in the tunnel. In Tennessee, both the Titans and Seattle Seahawks remained inside through the anthem.

Here's a breakdown at each game, as observed by AP reporters:

- Cleveland Browns at Indianapolis Colts: About 24.

- New York Giants at Philadelphia Eagles: At least three (and three other players raising their fists).

- Denver Broncos at Buffalo Bills: About 35, including Bills RB LeSean McCoy and about half of the Broncos' roster.

- Pittsburgh Steelers at Chicago Bears: The Steelers stayed in the tunnel, although Army veteran Alejandro Villanueva stood outside the tunnel with his hand over his heart.

The amount of protests around the NFL ballooned this weekend in the wake of President Donald Trump's criticism of players who protest during the national anthem. Only four players were observed kneeling or sitting last weekend, and two others raised their fists.

Report a typo to the ABC13 staff
Related topics:
sportsprotestnflpresident donald trump
Copyright © 2022 by The Associated Press. All Rights Reserved.
NFL
Chiefs fans donate $178K to NY children's hospital after beating Bills
NFL draft order for 2022: First-round picks from 1 to 32, including...
We've got our eyes on Texans' next head coach candidates
Super Bowl LVI halftime show set to be a '90s lovefest
TOP STORIES
How a penny-sized 'Glock switch' can turn a handgun into an automatic
Union Pacific addresses issue of stopped trains blocking roads
Daylight shows home destroyed after standoff with shooting suspect
What we know about man accused of shooting 3 HPD officers
Widow delivers heart-wrenching eulogy for NYPD detective
Suspect arrested after 30-minute chase ends on I-45 in Texas City
Rainy Monday and arctic cold front on the way after sunny weekend
Show More
5 people charged in connection with Pct. 5 corporal's murder
How many times can I reuse my N95 mask?
Decades after TV anchor disappears, convicted rapist denies connection
Driver dies after slamming into 18-wheeler's trailer on US-59
Woman shot in the shoulder during robbery set up in SW Houston
More TOP STORIES News