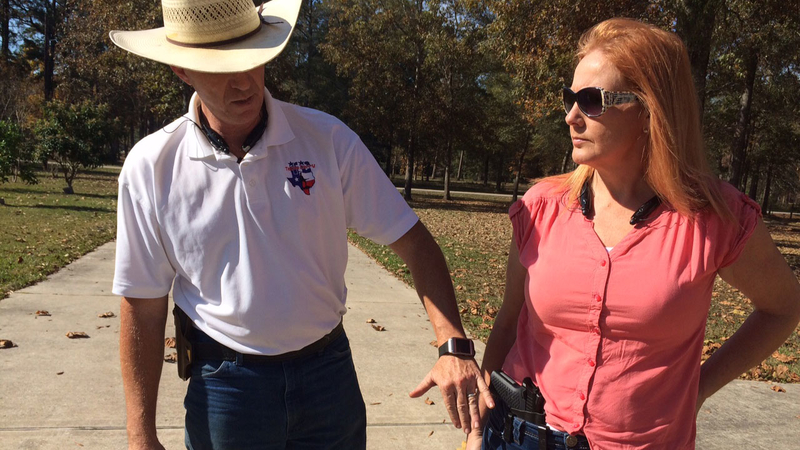 HOUSTON (KTRK) -- Terry Holcomb is looking forward to January 1, when Open Carry becomes the law of the land in Texas.

"Anywhere you can conceal carry today, you'll be able to open carry come January," says Holcomb, who runs the gun rights group, Texas Carry. "The exception is for college campuses."

As an advocate for the passage of Open Carry, Holcomb says law enforcement officials around the state have nothing to worry about from citizens with a license to carry. Holcomb says he has constantly told his membership to be respectful of police officers, but does admit, there are people out there who would not follow his lead.

"I can't worry about those people," he said.

Among police chiefs around the state, the Open Carry legislation was not popular. Most, including the Houston Police Chief, opposed the legislation that eventually passed.

"How are they supposed to know the good guy from the bad guy? If everyone is carrying guns," asked HPD Chief Charles McClelland in an interview with Eyewitness News last week.

"You always know who the bad guy is because they're usually shooting at you," retorted Holcomb, who points out similar fears about the legalization of conceal and carry didn't become a major issue as the years wore on.

Perhaps the biggest uncertainty once the law goes into effect is just how many people in Texas will actually open carry. Holcomb thinks a large percentage of people with license will open carry, the Houston Police Officers Union says say the number should be fewer.

"I think there's going to be some people that at 12:01 are going to strap a pistol on and go to Walmart, because they know they can now," said HPOU President Ray Hunt.

The Union says although it did not take an official position on Open Carry legislation, it is worried about an increase in calls from people who are not used to seeing guns in the public once the law goes into effect.

"Our major concern is that we're going to be sending police officers to every one of these calls," said Hunt.

He is concerned that there will be a spike in phone calls from concerned citizens calling police about people who open carry. Hunt says it could put officers in a difficult spot if they are required to respond to every one of these calls.