KGO
By Amy Hollyfield
LAKE COUNTY, CA -- The Valley Fire has expanded to 61,000 acres, has five percent containment and has moved into three counties: Napa, Sonoma and Lake counties. Middletown and Hidden Valley Lake are among the hardest hit communities. Governor Jerry Brown has declared a state of emergency for Lake and Napa counties.

Cal Fire has confirmed that a woman with a disability was killed in the fire and there are several people who are unaccounted for. Lake County authorities said they received phone call for a request to assist an elderly, disabled woman at a home on on Hot Springs Road at 7:12 p.m. on Saturday night. Officers and deputies responded to the area, but were unable to reach the subdivision as it had already been engulfed by flames.

The resident was apparently unable to self-evacuate and responders were couldn't make it to her home before the fire engulfed the structure. After the fire subsided authorities went to the residence and found her remains. She has not yet been identified.


In addition to the 400 homes that have been destroyed, many more are threatened. Mandatory evacuation orders are in effect. More than 17,000 people have already been forced from their homes. Several evacuation centers are now open, and many schools are closed for the day.

Firefighters say they had a good night fighting the Valley Fire and feel like they made significant progress.

DONATIONS: How to help victims of the Valley Fire where you live

"Obviously five percent may seem low. Even that little amount means we got some part of the fire that is fully contained at this point," said Cal Fire Chief David Shew.

Firefighters say the fire isn't progressing at the pace it was when it first started. Roughly 2,000 firefighters are on the scene and they have called for more assistance. The National Guard also been asked to help.

Evacuation orders are still in place and most people are complying. Firefighters realize it is tough for residents to stay away, but say with dangling power lines and debris everywhere it just isn't safe to let people in yet.

"Anxious to learn fate of their homes and property, we are very well aware of that. We have firefighters who live here homes have been impacted also it's still probably going to be couple days impossible to say with any accuracy right now.

At a meeting Sunday night, some evacuees expressed frustration at the number of homes lost. Cal Fire officials say early on, protecting property was not the top priority. Protecting people's lives was.


Cal Fire says there is damage to some of the cooling towers and power plants there. No homes in Sonoma County are threatened right now.

Governor Brown pledged Monday to bring in whatever resources are needed to fight the fire, including more crews from across California and other western states.

"Government is about many things, but it's fundamental obligation is public safety. Public safety in terms of protecting people against fires and disasters and also criminal activity. So it's really back to the basics. These are serious fires. People have been killed, hundreds of structures, more than that actually, have been destroyed, more to come," Brown said.

The governor held a briefing Monday morning in Sacramento County after meeting with Cal Fire at the State Emergency Management Center. He also emphasized this fire season and the ongoing drought serve as reminders that California must do more to fight climate change.

Crews are setting back fires along Highway 29 to starve the approaching fire of any fuel.

Officials say at least 27 people have been treated at hospitals in Lake and Sonoma counties. Twenty were treated St. Helena Hospital in Clearlake and seven were treated at St. Helena Hospital in Napa Valley. Most of those injuries were for smoke inhalation and classified as minor. Four firefighters were burned, but all are expected to recover. The cause of the fire is still under investigation.

Napa and Lake county officials have are warning evacuees to not post their address online. Burglars are on the prowl scamming fire survivors online and asking for addresses to go check on their homes in an effort to steal their belongings.

Many evacuees are worried about their pets and animals that were left behind. A Facebook page has been created to help reunite those residents with their animals.

The aftermath of the fire shows just how random fire can be. Highway 29, which goes through the heart of Middletown still has businesses intact, but just one block over in the neighborhood it's complete devastation. Empty lots are covered in ash instead of homes.

Chad Martin lives on the outskirts of Middletown on Hildebrand Drive. The homes there are fine, but he can see the smoke rising from the hills nearby.

"Never seen nothing like this. Within a short period of time I drove my bike and the whole side was just lit up," Martin said. "I haven't had much sleep here in the last two nights."

His neighbor has been going right up to the fire, digging out lines and throwing dirt on small patches of fire in an effort to help firefighters.

"We know the hills back there and we want to make sure everything safe for everyone here," said Nick Bracisco a Middletown resident.

Hundreds of people have been streaming into the evacuation center at the Napa Valley Fairgrounds since Saturday night. And so have donations.

It is full of people who say they barely escaped with their lives. Everywhere you turn people are sharing their stories, expressing how they are still in shock, and wondering if their homes are still there.

As fast as the fire struck, the Napa County Fairgrounds in Calistoga turned into a refugee camp overnight. The Red Cross says between 500 and 1,000 evacuees are camped out there with more still streaming in.

And even more donations ... Incredible how much community support there is #abc7now pic.twitter.com/CJ7djXwm3i

Just In - The #ValleyFire in Lake,Napa&Sonoma counties has now burned 61,000 acres & 5% contained.

Pet owner: My dogs are wondering where we are pic.twitter.com/iwUvXqNJYg

People slowly waking up at the Napa Co Fairgrounds in Calistoga, one of the evacuation centers pic.twitter.com/mlxnHl8Szg

@abc7newsBayArea Ash falling on vehicles all the way down in Oakley; SF Bay Area. #ValleyFire

#ValleyFire Guidance in good agreement for showers in the area Wednesday. However, it may come with 30-40mph gusts pic.twitter.com/T9vJ7aAfgR

Just In - The #ValleyFire in Lake County is now estimated to have burned 40,000 acres.

The Valley Fire has hit Middletown. A school and several homes have been destroyed.

We had to evacuate. It was in my back yard 😭😭 #abc7now pic.twitter.com/mBaplybPRS

Additional Mandatory Evacs on #ValleyFire in Lake Co. From Hwy 29 & Hwy 175 south to Seigler Canyon Road, along the south side of Hwy 29.

Explosions from propane tanks, homes on fire, and Main Street in Middletown in flames. It's a terrible night in Lake County.

Middletown was where evacuees escaped to for Wragg & Rocky fires earlier this summer. Now it's hit by Valley Fire. pic.twitter.com/MAURjuQYaj

Middletown in Lake County is now under a mandatory evacuation due to the #ValleyFire. Hwy 29 now closed at Lower Lake to Middletown.

The evac center for people on south side of the #ValleyFire is in Calistoga at the Napa Co fairgrounds. @RedCross is setting up. #abc7now

Update on the 4 burned firefighters from the #ValleyFire. All suffered 2nd degree burns and are in stable condition at UC Davis Medical 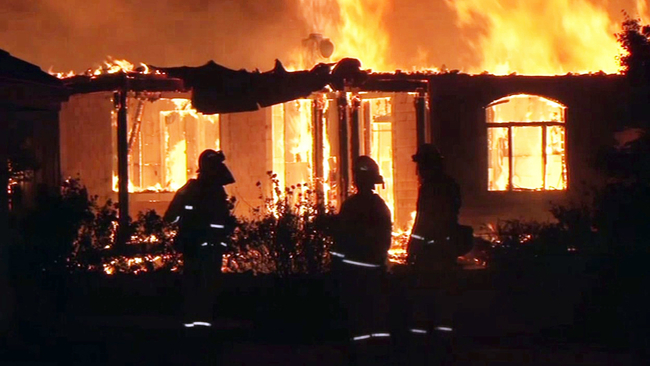