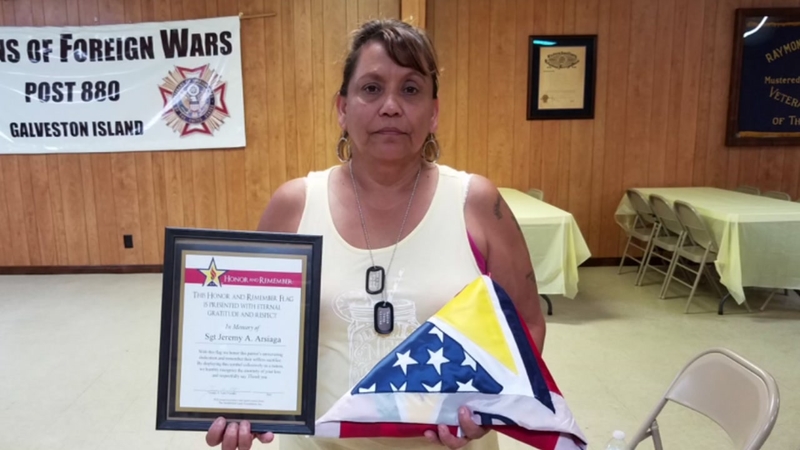 GALVESTON, Texas (KTRK) -- Two brothers who dedicated their lives to serving this country were honored at the Galveston VFW Saturday by an organization devoted to remembering fallen soldiers.

"Honor and Remember" said its mission is to recognize the sacrifice of America's military. The group wants Congress to adopt a national remembrance flag. They travel the country, presenting personalized flags to families who have lost those who've made the ultimate sacrifice.

Specialist Robert Arsiaga and his younger brother, Sergeant Jeremy Arsiaga, did just that.

Jeremy died 11 years later on September 4, 2015 after struggling with PTSD and depression. He was 31 years old and took his life two days before his 32nd birthday.

The brothers grew up in Midland, Texas, but their mother, Sylvia Macias, moved to Galveston one year ago.

Macias was presented with two Honor and Remember flags, one bearing Jeremy's name, the other with Robert's name.

"The ceremony was very intimate and somewhat bittersweet. It hurts to see both of my brothers' names on those flags, but it's amazing we have organizations like Honor and Remember and the VFW that do things like this to keep the memory of our loved ones alive," said Gilbert Arsiaga Jr. Gilbert was the middle of the three brothers.

National Geographic is turning Raddatz's book into a miniseries. It's scheduled to premiere this fall. Actor Ian Quinlan will play Robert Arsiaga.

If you would like to memorialize a soldier with the Honor and Remember flag, you can donate and learn more about the process here on their website, www.honorandremember.org.

A Jordanian soldier now faces charges in connection with the death of a local Green Beret.

The father of a US soldier who was killed at King Faisal Air Force base near Al Jafr in Jordan, wants justice for his son.