KTRK
By Ted Oberg
HOUSTON (KTRK) -- On the eve of a trial of Victor Trevino, one of Harris County's most prominent law enforcement chief's, a former deputy is alleging retaliation and discrimination in a federal lawsuit and said that Trevino is trying to paint him and others negatively in order to tarnish them as possible witnesses.

The man behind these accusations is former Harris County Precinct 6 Constable's officer Jarrell Caldwell, who said he was forced to resign with a "dishonorable" discharge in October of 2013.

Up until then, he was promoted and Caldwell said he had strong performance reviews at the office. And Caldwell was a Precinct 6 insider, working there for 14 years and was even one of Trevino's biggest single campaign donors with a $1,500 contribution, according to a 2012 report.

But after Trevino was re-elected -- and indicted -- Caldwell said Trevino squeezed Caldwell out of his job and kept him from getting a new one with the "dishonorable" tag.

Trevino says it was due to Caldwell's untruthfulness, which Caldwell denies.

"The name of the game is discredit before they testify," said Caldwell attorney Larry Watts.

Trevino, Harris County's Precinct 6 Constable, is accused of four separate crimes, including one that he took money for personal use from a charity he founded. His trial comes in the wake of a series of investigative reports by ABC-13.

Prosecutors built their case against Trevino, at least in part, with grand jury testimony from some of Trevino's employees, including some of whom no longer work at the agency.

Caldwell may not be a witness in the Trevino trial, but has met repeatedly with prosecutors.

"I think they suspected Jarrell Caldwell knew more than they wanted him to tell... at trial," Watts said.

And it's not just Caldwell, according to the lawsuit. Tyrone Berry was a longtime senior staffer at Precinct 6.

Berry has been subpoenaed to testify at trial and also met with the grand jury that indicted Trevino.

Months after Berry testified he, too, was given a dishonorable discharge by Trevino.

In addition to disputing the dishonorable discharges, Caldwell's lawsuit outlines that Trevino has not been as harsh with some of his staffers who left his office -- even after being convicted of crimes.

Some examples in the lawsuit:

Reserve Deputy Tomas Roque pleaded guilty to guarding a cartel deliver cocaine across Houston in return for $2,000 while in his Precinct 6 uniform, according to the lawsuit.

He was given a general discharge, not a dishonorable one.

Mark Timmers was convicted of theft, but the lawsuit says, he was given a general discharge as well.

And according to the lawsuit, so was reserve Deputy Jose Castillo who was convicted of murder.

Officials with the Harris County Attorney's Office said they were aware of this federal suit but have not yet responded.

We asked Trevino if he was trying to discredit potential witnesses.

Trevino was silent, except to say, "Everyone is treated fairly and equally at our precinct."

Even though the series of ABC-13 stories ran in 2011 and Trevino was indicted in November 2012, he remained popular in the East End. 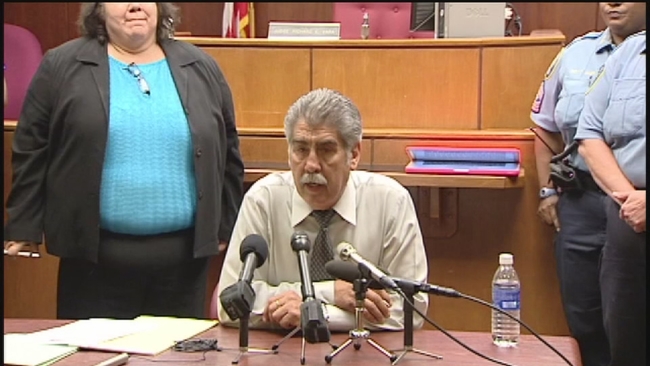