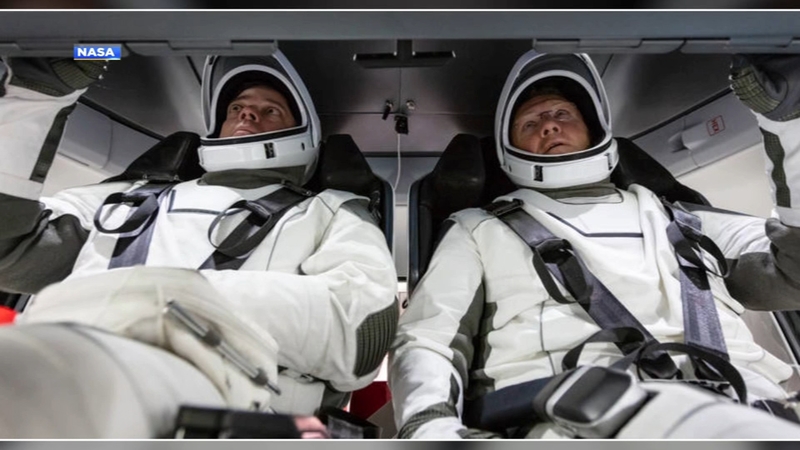 Countdown is on to historic NASA launch

HOUSTON, Texas (KTRK) -- NASA has a big week ahead as for the first time in almost a decade, Americans will launch into space on an American built rocket from American soil.

In a launch that NASA and SpaceX have been working on for years, a commercially built and operated American rocket will carry astronauts to the International Space Station.

We are just eight days away from the historic launch.

Overnight, the SpaceX Demo-2 Crew Dragon arrived at the assembly building at the Kennedy Space Center in Florida. It will go to the launch pad on Thursday.

NASA expects big things from the Dragon as it will once again allow American astronauts to reach the space station from American soil. Right now, we rely on the Russians for that.

Astronauts Doug Hurley and Bob Behnken will be in the Dragon spacecraft as it makes its way from Florida to the ISS on May 27.

The pair has been living, working and training here in our area for the last few years.

Behnken lives in Clear Lake, and his neighbors are super excited about the launch, placing signs in their yards counting down the days to the journey, and of course, giving their support to their astronaut neighbor.

My neighborhood has been at it again. Just in case @NASA or @SpaceX needs a backup countdown calendar, they've got it covered! #LaunchAmerica pic.twitter.com/5T5XfNWeFq

ABC13 had a chance to speak to Behnken's wife, Megan McArthur, about the launch. She is also an astronaut, so she has another interest in seeing this launch and the success of the mission.

"I try not to think about that moment too much. This time will be different because my son will be with me and feed off whatever emotion I'm having. I think outwardly I'm going to be excited and happy and big smile. It's hard to know exactly how I'm going to feel. It might be, 'Here we go,'" said McArthur.

Astronauts Hurley and Behnken are spending their last night with their families before heading to Florida. The next big hurdle is May 21 when we get a "go" or "no go" for the mission to proceed.

Then if all goes well, the launch will take place next Wednesday.

Applications open next week to be in NASA's next class of new astronauts, but do you have what it takes?

ABC13's Nick Natario and HTX+ find out why Frenchie's in Clear Lake is a popular eatery with NASA astronauts.