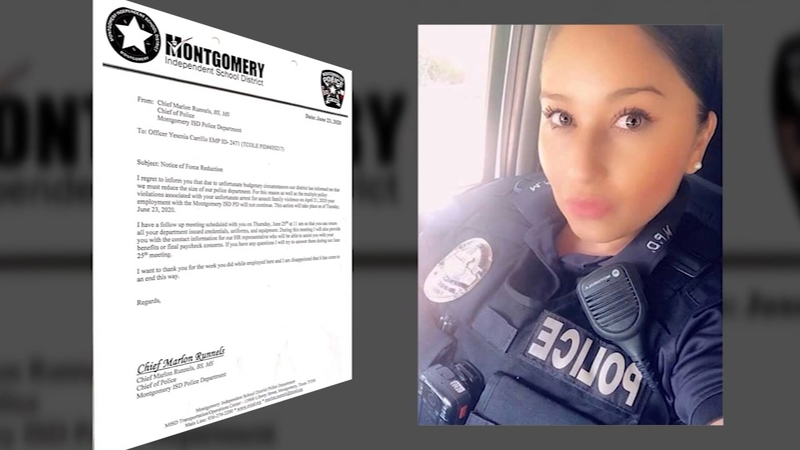 HOUSTON, Texas (KTRK) -- A fired Montgomery ISD police officer is fighting for her career and reputation after she says she was wrongfully accused of domestic violence.

Yesenia Carrillo, 29, says the last 20 months have been a nightmare.

"My name was trashed," she said. "The whole process was very humiliating. I was crying the whole time."

On April 21, 2020, Carrillo was arrested for a misdemeanor assault on her then-boyfriend, a detective with the Montgomery County Sheriff's Office. She and her son were moving out.

She said she never assaulted him, but a week later her mug shot was front-page news.

A couple of months later, she was fired from her job with the Montgomery ISD Police Department, in part, because of the criminal charge, according to her termination letter. She had been employed with the district for two years.

"There was a point that I got to my lowest point in life because of all this," Carrillo said.

Carrillo attended court-ordered counseling as part of a deal for the case to be dismissed. Court paperwork she shared with ABC13 shows the dismissal came in August 2020 "in the interest of justice." She applied for expunction, or the complete removal of the arrest, and it was finally granted this past August.

She says since she's now free and clear of the case, she has taken her ordeal to TikTok, where her more than 40,000 followers can hear her side.

"What truly did happen, the injustice that occurred to me. Everybody who knows me, knows the person who I am and behind the badge I'm a human being. I'm not perfect but I did not do any of what they put me out to be. They ruined my reputation that I worked so hard for."

In response, the Montgomery County District Attorney's office told ABC13, "If a case is the subject of an expunction order, the code of criminal procedure prevents the disclosure, dissemination, or use of records or files related to the case." They are not permitted to discuss it.

Carrillo says she and her son have been through so much. With her name cleared, she hopes she can once again be a police officer.

"I just want to be back in uniform and be back to work because that's what I love doing."