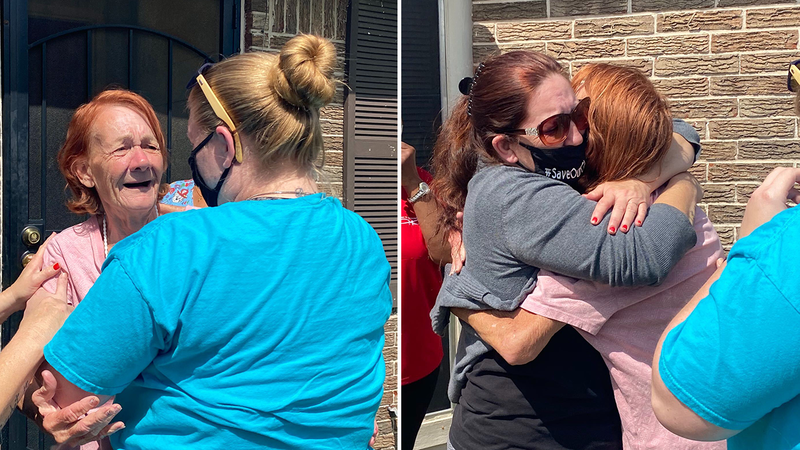 Group home resident reunites with family who can't find her

HOUSTON, Texas (KTRK) -- An emotional reunion tonight for a Conroe area family who has been looking for their missing aunt for more than a year. ABC13 helped make it happen.

Deborah Hood, known by her family as Aunt Debbie, suffers from a number of mental health issues. Last June, she walked away from a group home in Kingwood, and her family has searched for her ever since.

"I tried to file three missing person's cases," said her sister Ella McGready when we first met her on Thursday. The family saw the story of the 35 disabled adults crammed into a group home in the 14000 block of Long Meadow Drive on TV.

The adults were moved out of that unlicensed group home into a number of area facilities late Monday night.

When McGready and her daughter drove to the house on Thursday afternoon, we were on the scene covering the story. The family showed ABC13 the picture of Aunt Debbie, and asked for help.

We reached out to State Senator Borris Miles, because his staff had helped find placement for many of the adults. Friday morning, one of the managers of a licensed facility also contacted the senator, and as it turned out, they were housing Aunt Debbie.

"When you see people just putting them in a house for a paycheck, it's very frustrating," said Betty Holman, who runs two Canaan Independent Living facilities in Houston's north side. "People are not cattle, they're human."

ABC13 contacted Aunt Debbie's family, and everyone met up at the home Friday afternoon. Shortly after 2 p.m., McGready, her daughter Maxine Leitz, and another relative pulled up. Moments later, Aunt Debbie ran out of the house, and tears flowed.

"I missed you! I love you," the sisters said to each other as tears flowed. Senator Miles and Holman watched and clapped.

Aunt Debbie was substantially thinner than she was when her family last saw her. Her wrists showed some bruising that she said was caused by staff in the unlicensed home.

"People need to be prosecuted," said an angry McGready through her tears.

In all, more than 35 adults were rescued from that home. The Harris County District Attorney's Office and the State of Texas Adult Protection Services are investigating. So far, there are no criminal charges.

Senator Miles says he plans to pass legislation so it's tougher for these facilities to operate under the radar.

"We've got to be able to close the loopholes that are allowing this type of behavior, and housing people in this condition."

Aunt Debbie says she does not know how she ended up in that house in Southeast Harris County, but is glad to be reunited with her family.

Her family says now that they have located her, they will be taking her to the doctor to get her medication back on track, and just enjoy spending time with each other.

The family left together, in the same car, back to Conroe Friday afternoon.

The investigation into exactly how the group home came to be, continues.