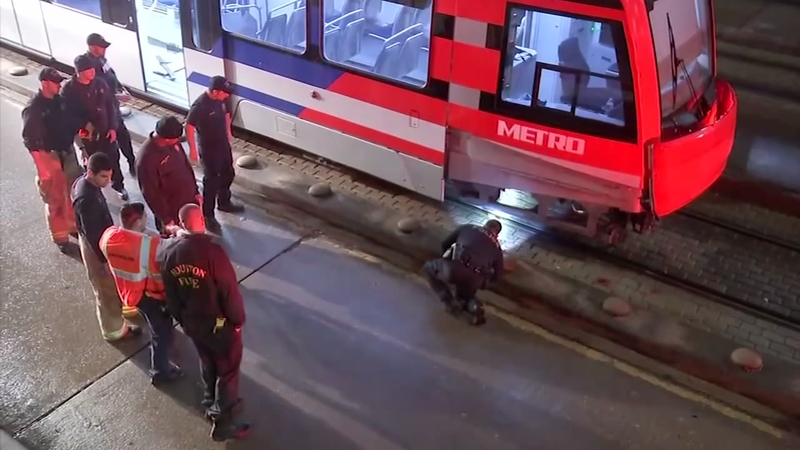 Could METRO deaths have been prevented?

HOUSTON, Texas (KTRK) -- Houston's light rail is having a tough time stopping accidents. Just a few weeks ago another man died after getting hit by the train in midtown.

On March 16, Roland Deadrick died after getting hit by METRO's light rail train in Houston's midtown. At the time, it was the second light rail death in 6 days and only added to the grim safety record that makes Houston METRO's light rail the most collision prone light rail system in the nation for the last five years.

Wilton Winfree knew the man who died that day.

"Everyday people go in front of that train thinking they can beat it," Winfree said.

Those near misses happen all the time.

If anyone should know better, it's Jim Robinson, the chairman of METRO's public safety committee.

"I was thinking about something else and almost stepped off in front of a train," Robinson said. "It got my attention when he blew his whistle."

"We're having too many accidents and we're going to go forward and try to change that dynamic," Tom Lambert said.

But METRO's own statistics show that accidents this fiscal year are actually up compared to last.

"It's a frustrating reality," Robinson said.

And yet somehow a METRO train safety consultant recently called our most accident prone system in the nation "fundamentally safe" blaming accidents on the "unsafe practices of motorists and pedestrians."

METRO video from last March shows a man just walking into the path of a train. Houston's spotty safety record may be due in large part to the fact it is almost all at street level.

METRO cameras record close calls with pedestrians and bikes across its system.

In Dallas, where there are fewer light rail accidents, almost all track is physically apart from traffic.

"Well, if we had to do it all over again, I'm sure we would not put it at grade," Robinson said.

METRO is waiting on two more consultant safety reports and has already made some improvements and Robinson says will likely approve a plan later this month to fence off the light rail line all the way through Midtown.

"I don't think they made it safe yet," Winfree said.

These men think it could the fence could have saved their friend's life.

That fencing plan won't be in place until December.


If you're viewing this on the ABC13 app, click here for a full-screen experience.

July 22, 2013 - Vivian Guan
Vivian Guan was on her bike near a platform at Main Street and Walker. Guan turned left onto a track into the path of an oncoming train. She was hit and killed.

Guan did not appear to see the train until just before it hit her, a report said.

March 2, 2015 - Lenae Johnson
Lenae Johnson was in Houston for a wedding. She crossed onto the track near Main Street and Drew Street in front of an oncoming train. She was killed on impact.

Johnson may have been unfamiliar with Houston and h ad headphones in at the time, a report said.

June 2, 2015 - Steven White
Steven White was near the intersection of Fannin and Interstate 610. This intersection is listed as a 'no clearance' zone that creates a blind spot for drivers, though there's no indication that the blind spot contributed to this crash.

White was on the track when the train hit him, killing him. Family members told METRO that he was hearing-impaired and not wearing his hearing aids at the time.
June 10, 2015 - Billy Forsythe
Just eight days after the death of Steven White at the intersection of Fannin and I-610, another pedestrian walked into a train. Billy Forsythe died when he didn't "acknowledge the presence of the train" before being hit.

Nov. 1, 2015 - Julian Chad Edward
Julian Chad Edward was running across McGowen Street at Main Street when he was hit and killed by an oncoming train. One of the contributing factors of the crash included the fact the operator was not properly sounding the train's 'gong'. The operator was required to attend 24 hours of retraining.

Feb. 3, 2017 - Marjorie Corcoran
Rice professor Marjorie Corcoran was hit while on her bike at Fannin Street and Sunset Boulevard. She was riding out of the Hermann Park area when she was hit after her bike went into the track.

Feb. 5, 2017 - Bilal Muslim
Two days after Corcoran's death, Bilal Muslim was hit at Fannin Street and I-610. It's the third crash in that location since 2013. Muslim was on a bike and started to cross the tracks, then turned around when the train approached.

Note: Photos of accident scenes were included in some of the reports above and those pages were removed in the above-published versions.