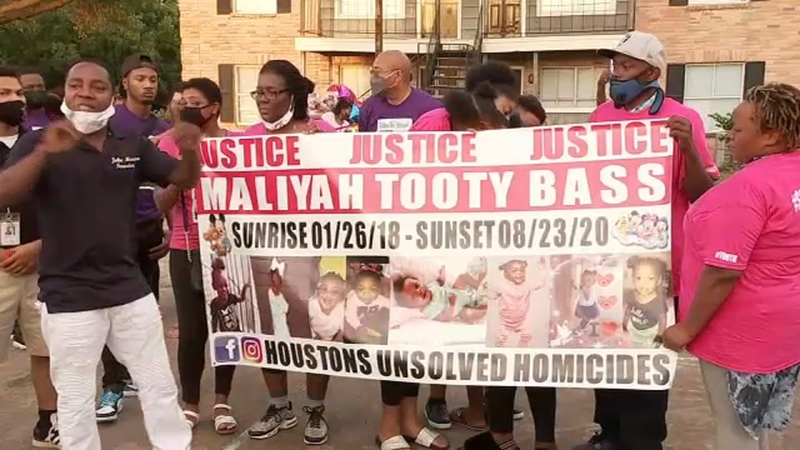 HOUSTON, Texas (KTRK) -- The body of Maliyah Bass was formally identified Sunday, a week after she went missing from a playground at her parents' apartment complex.

The Harris County Institute of Forensic Sciences confirmed what her family already knew, but a cause of death hasn't been determined.

The identification came a day after Maliyah's grandmother spoke to ABC13 about their family's grief over losing the 2-year-old little girl.

"She loved baby shark. She loved pink. She loved Minnie Mouse," Rosalie Jimerson said. "She was just my everything. I hate that she's gone but I want justice for Maliyah."

Many Houstonians hoped the body found would not be Maliyah's, however her grandmother, and now the medical examiner have confirmed it to be true.

💔Maliyah Bass' mother and her boyfriend returned to their apartment today. Neighbors were extremely worked up. Some had to be held back from attacking the two. Ultimately, neighbors say they are questioning what really happened to the 2-year-old girl. 💔https://t.co/l1ckdrsWJZ pic.twitter.com/DHs4i4XdnE

Police say Maliyah's mom told them the 2-year-old was playing in the courtyard outside their apartment in 10600 block of Beechnut St. The 20-year-old said she left the toddler alone for a few minutes, when she came back Maliyah was missing.

Police believe foul play was involved in the child's death. So far, no arrests have been made.

"Our job is to try our very best to find out what happened," said Houston Police Chief Art Acevedo.