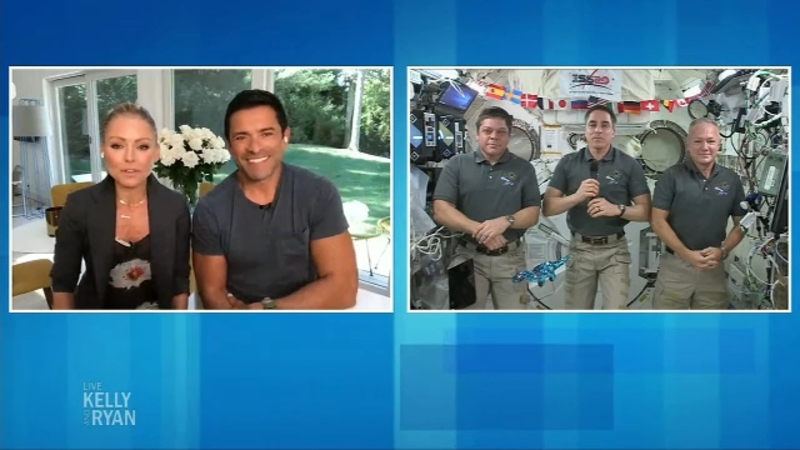 You may remember the historic blast off of Astronauts Hurley and Behnken aboard the Dragon by SpaceX and NASA back on May 30th. They are set to return back to earth from the ISS on Sunday.

"We've got some weather that we're watching but God willing they'll get off on time," Cassidy said. "We've had a fantastic stay together."

Cassidy arrived in April with two Russian cosmonauts and isn't scheduled to leave until October.

"It was really quite special to fly over the Kennedy Space Station two minutes before they launched and to know that they were making a beeline to rendezvous with us the next day," Cassidy said of Hurley and Behnken's historic arrival.

Ripa asked how they were able to stay still during the interview, and Behnken said they had their feet in restraints. Then the astronauts demonstrated that they would float away if they didn't. "We've been practicing that for the past two months and we've almost got it down," he said.

Ripa and Consuelos asked the astronauts about tasks like going to the bathroom, eating and drinking.

"Gravity on earth greatly increases your chances of success," Hurley joked about their bathroom business.

"There's a lot of food up here currently, and we're never at a shortage of what to eat," Cassidy said. Although he admitted that some items are always the last to go because they're not their favorites.

Another thing the astronauts do daily, exercise!

"We exercise for two hours every day and do weightlifting and either running or cycling on equipment that's been developed and honed on the International Space Station," Behnken said. He noted they need to be in good shape in case they need to climb out of the capsule upon landing in the water.

Hurley also gave a shout out to his hometown of Apalachin, NY and "Live" producer Dana Dodge who is also from the same town.

Before they signed off, the astronauts showed off how they drink water out of packages and can float blobs of the water and drink them out of the air.

"I never thought that would be possible, that's real cool," Consuelos said.

"I am stunned, I just want to be an astronaut!" Ripa said.