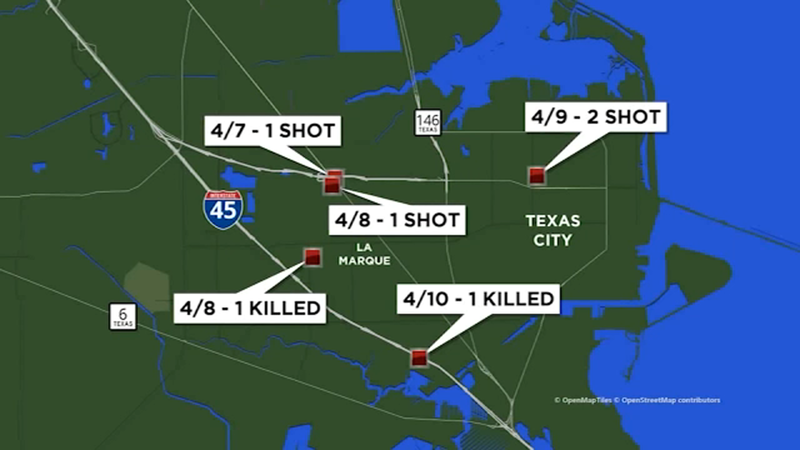 Thursday in La Marque, a 56-year-old man was killed in a drive-by shooting on Virginia Street. No one has been arrested.

Then on Friday, Texas City police said a man showed up to the hospital with a gunshot wound. It is unclear where he was hit. About an hour later, a man was shot in his car during a drive-by on Oak Street and the Lowry Expressway. Police said they believe the two are connected but have not said what led them to the conclusion. No suspect information has been given.

Then early Saturday morning in Texas City, police said a woman and her 2-year-old daughter were shot through a window of their home at the Tradewinds Apartments. The child was taken to the hospital in critical condition. The mother was hit in the leg. No suspect information was released in that incident.

About 24 hours later, La Marque police got a call about a stalled vehicle on the Gulf Freeway. When they responded, officers said they found the car had been riddled with bullets.

Police later identified the driver as 42-year-old Patrina Compton. She was hit and had been rushed to UTMB where she passed away.

UTMB confirmed Compton worked in their hospital system since June of 2001. For the majority of the time, records show she worked as a nurse.


Investigators said they believe the shooting was targeted and have not ruled out the possibility of road rage.

Monday afternoon, someone drove through an alley behind a Texas City Housing Authority community and fired at least a dozen shots at a duplex at the corner of 2nd Avenue North and 9th Street. Fortunately, no one was home at the time and no injuries were reported.

A suspect description was not immediately released.

Both La Marque and Texas City need help identifying the persons responsible for the crimes. Anyone with information is urged to call Galveston County Crime Stoppers at 409-763-8477.