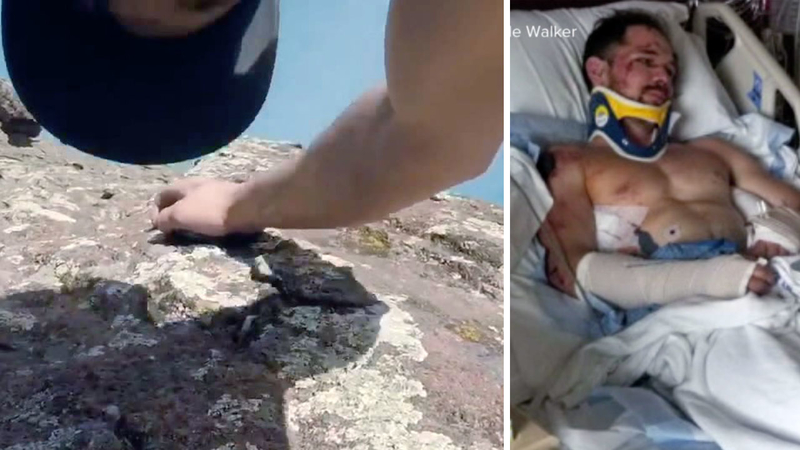 BOULDER, Colo. -- A climber says he is lucky to be alive after surviving a harrowing fall while attempting to scale a rock formation last month.

Kyle Walker was free climbing with no ropes in the Flatirons rock formations near Boulder, Colorado, in April when he lost his footing, he told the Boulder Daily Camera newspaper.

A GoPro camera strapped to his chest captured the fall, which Walker estimated was about 60 feet. It continued to roll as he tumbled down the rock face to a painful landing and then showed him moaning as he drifted in and out of consciousness.

Walker told the paper he broke both wrists and his pelvis and had eight busted ribs and a punctured lung. Another hiker eventually discovered him and notified authorities.

He said he healed remarkably quickly and is now out of the hospital.

"I consider myself beyond lucky and wouldn't recommend climbing new routes without practice or ropes to anyone," Walker told the newspaper.
Report a correction or typo
Related topics:
coloradofallu.s. & worldgopro
Copyright © 2022 KTRK-TV. All Rights Reserved.
U.S. & WORLD
Minnie Mouse celebrates Disneyland Paris anniversary with new look
10 injured in PA bridge collapse; human chain formed to help
'Tiger King' Joe Exotic resentenced to 21 years in prison
Moderna launches trial for HIV vaccine that uses mRNA technology
TOP STORIES
Daylight shows home destroyed after standoff with shooting suspect
What we know about man accused of shooting 3 HPD officers
Suspect arrested after 30-minute chase ends on I-45 in Texas City
Clouds clearing today, sunny through the weekend with rain next week
5 people charged in connection with Pct. 5 corporal's murder
How many times can I reuse my N95 mask?
Decades after TV anchor disappears, convicted rapist denies connection
Show More
Driver dies after slamming into 18-wheeler's trailer on US-59
Woman shot in the shoulder during robbery set up in SW Houston
Prepare for a major closure at I-69 and 610 West Loop this weekend
Officers escort body of corporal killed in ambush to funeral home
ABC13 obtains HPD scanner traffic of chase that led to shootout
More TOP STORIES News