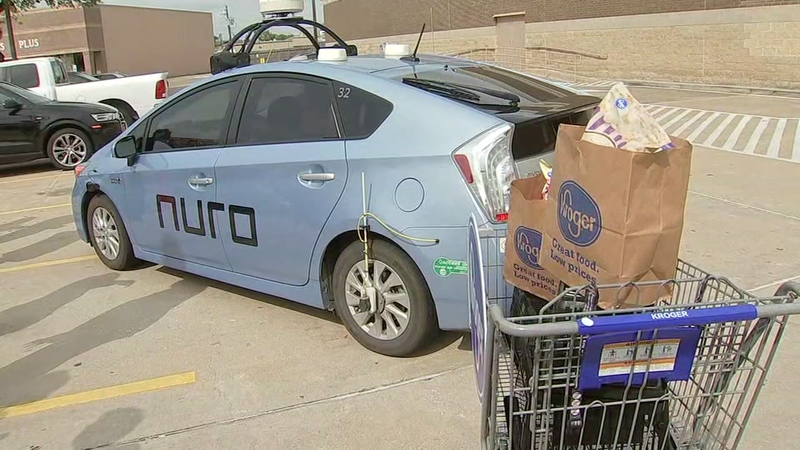 HOUSTON, Texas (KTRK) -- Walking into Kroger to get your groceries could be a thing of the past. Two Houston stores now have deliveries brought curbside from a driverless robotic car.

Busy mom Patricia Donnelly thinks the cars could be the best way to get time back with her family.

"I do have three kids, I work full time," Donnelly said. "Having someone bring me my groceries does sound pretty awesome sometimes."

Nuro's R-1S vehicle could make the grocery trip a thing of the past for Kroger customers.

The driverless grocery deliveries will be offered at the stores on South Post Oak Road and Buffalo Speedway. That means you can take advantage of the service if your zip code is 77401, 77096, 77005 or 77025.

"Initially, we are going to start delivering with our self driving Prius vehicles, so these are passenger vehicles just like regular Priuses that we've added sensing and computing to so they can drive themselves," Nuro co-founder and president Dave Ferguson said. "There will still be safety drivers in them."

If your local Kroger is one of the two chosen locations, you simply order your food online or through the Kroger app. Next, pick your time slot for same-day or next-day delivery, and the price is just $5.95.

"When you go out to greet the vehicle, there's a touch screen on it similar to an iPad, and you can enter your unique code and then it will open just your compartment," Ferguson said.

Shoppers like John Jones say he's worried about the safety of a car with no human driver.

"Leery. I just don't think we are there yet to have a driverless car," Jones said.

SEE ALSO: Machines to take over 75 million jobs from humans in the next 4 years

Ferguson says most crashes worldwide happen because of human error.

"We generally feel that when you remove passengers from the vehicle, you can make it much safer for everyone else on the road," Ferguson said. "For example, our vehicle is much smaller, it's much lighter, it sort of collapses in the unlikely event of any collision."

If you've got questions, you aren't alone.

City of Bellaire Assistant Police Chief Onesmio Lopez said their first step: working to form a research team so they know how to handle an incident with a car that doesn't have a driver.

"Most of the crashes in Bellaire, greater than 60 percent of them, were either rear end or side swipes, and we're hoping the technology will be able to adapt for that," Lopez said.

While there are plenty of questions, for now, Lopez says treat the cars like regular drivers.