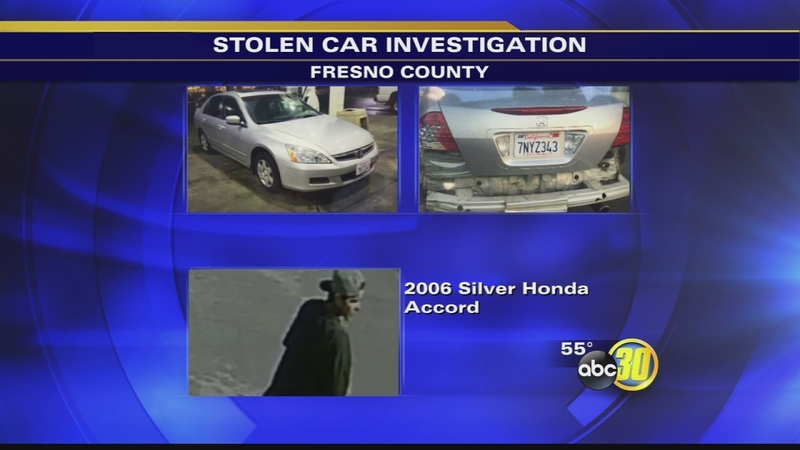 FRESNO, CA -- A father and his young daughter were briefly separated Tuesday after a car theft turned into a kidnapping in Fresno County. The family has since been reunited but the suspect is still on the loose.

The father started yelling, "my baby, my baby," when the car took off. At first the employees thought he was referring to his car but they quickly realized that baby was his daughter.

The family's frightening story started in the parking lot of Punjab Auto Repair. Cameras captured a man jumping into a silver Honda Accord with a sleeping toddler inside. The father left the keys inside while talking business just feet away

"One second you turn around, your car is gone, your kid too. It's got to be the worst thing in the world," said Tony Botti, Fresno County Sheriff's Office.

Deputies said the suspect must have realized quickly there was a three-year-old in the backseat. He pulled the car over just a few blocks north-- leaving the toddler wandering on the side of Pleasant Avenue.

"Kind of just dumped her off in the middle of the street and she chased the car toward Olive," said Angel Zapata, witness.

A couple driving by saw the little girl and brought her over to Zapata to see if she lived in the neighborhood. Zapata and others called 911.

"People do speed out here and luckily the little girl was safe, didn't get hit by a car or worse-- fall into the wrong hands," said Zapata.

Dispatchers quickly put two and two together realizing she was the victim of the car theft. Deputies reunited the family. They were shaken but grateful.

"I know how scared the parent must feel," Zapata said.

The father is now only missing his car, something once valuable but now replaceable.

"This just goes to show how these people operate. I mean, he drops a three-year-old by the side of the road, by herself, where there is heavy traffic. I mean-- come on. It's ridiculous," said Botti.

Deputies are still searching for that suspect and the stolen silver Honda Accord which has a missing rear bumper.