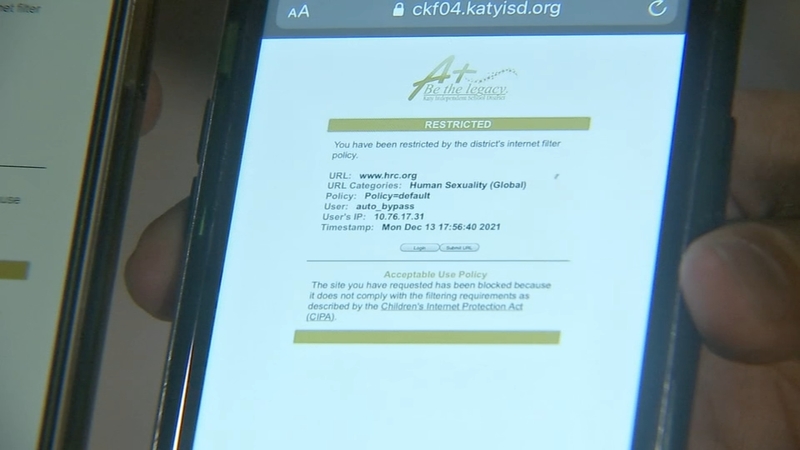 KATY, Texas (KTRK) -- Katy ISD's school board is under fire again for continuing to block websites that provide resources like counseling and hotlines for LGBTQ+ students.

"I was shocked to see that a district that strives to be the legacy has an internet filter that discriminates against the LGBTQ+ community," said Cameron Samuels, a senior at Seven Lakes High School.

Organizations like The Trevor Project, The Human Rights Campaign and The Montrose Center are all blocked by students using the district's Wi-Fi on campus.

A petition created by the 'Students of KATYISD' group is demanding change to allow access to LGBTQ+ resources and websites.

"The Trevor Project is a suicide prevention lifeline and resource for LGBTQ+ youth, and whenever a student is on the verge of committing suicide, it is a matter of life or death, and these policies are a matter of life and death," Samuels said.

"Suicide is actually the second leading cause of death for youth in America, with LGBTQ+ youth being four times as likely to attempt suicide, make a plan for suicide or have suicide ideations," said Ruiz.

"The District provides a variety of communications and technology resources that are consistent with its educational goals and align with the Children's Internet Protection Act (CIPA). Because there are billions of websites housed on the world wide web, content that is made available to students during the instructional day, is reviewed and filtered by a third-party school-based platform that ensures CIPA compliance. The filtering process accounts for all material that may be found on a website, including hyperlinks to external content such as electronic mail, chat rooms and other forms of direct electronic communication - spaces often occupied by both minors and adults, and discouraged by CIPA. The District's responsible use guidelines for student technology can be found here."

Samuels says the school board president has made a verbal commitment to unblock, at the very least, the Trevor Project website, but there is no timeline for that change.

"Hopefully we do see their words turn into action," Samuels said.

A spokesperson for Katy ISD says a formal request to review the websites is now in process with Katy ISD technology.

For its part, The Montrose Center says someone with Katy ISD administration did reach out last week to talk about a cultural competency training. The training was not scheduled, but Ruiz called it a good "first step."