Jussie Smollett's character to be removed from 'Empire', producers say; actor charged with felony out on bond 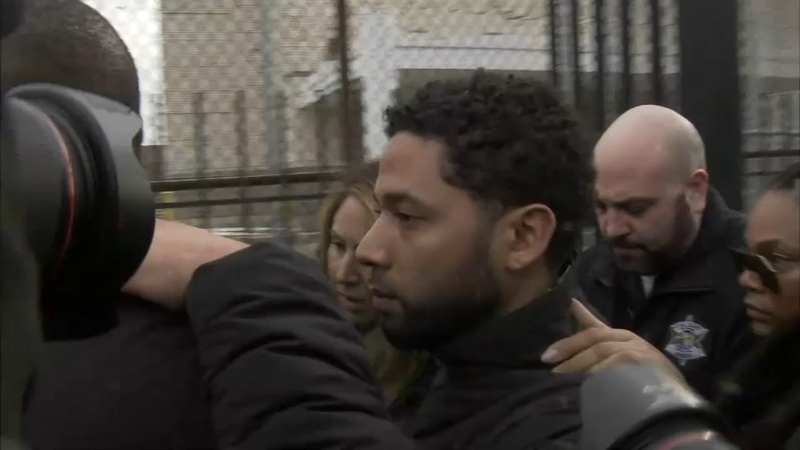 Jussie Smollett's character to be removed from 'Empire', producers say; actor charged with felony out on bond

CHICAGO -- Jussie Smollett's character will be written off the last two episodes of the TV show "Empire," showrunners announced Friday.

The executive producers of the show, including Lee Daniels, issued a statement Friday morning that said they have decided to remove Smollett's character, Jamal, from the last two episodes of the season.

The producers said they "care deeply" about Smollett, who "has been an important member of the show's family since the beginning." They said the last few weeks have taken an emotional toll on the cast and crew, and called the allegations "very disturbing." The producers decided to remove Jamal to avoid further disruption on set, as the legal process plays out.

"The events of the past few weeks have been incredibly emotional for all of us. Jussie has been an important member of our EMPIRE family for the past five years and we care about him deeply. While these allegations are very disturbing, we are placing our trust in the legal system as the process plays out. We are also aware of the effects of this process on the cast and crew members who work on our show and to avoid further disruption on set, we have decided to remove the role of 'Jamal' from the final two episodes of the season." -Lee Daniels, Danny Strong, Brett Mahoney, Brian Grazer, Sanaa Hamri, Francie Calfo and Dennis Hammer, executive producers of EMPIRE.

'Empire' actor Jussie Smollett has been charged with a felony and posted bond. So what's next?

Smollett is out on bond after he was charged with disorderly conduct for allegedly filing a false police report about a hate crime that he allegedly staged against himself.

Jussie Smollett is maintaining his innocence, reportedly telling castmates that he would never do something like this, according to the website TMZ.
Smollett reported to work immediately after posting bond Thursday, driving directly to a studio on the Southwest Side where "Empire" films.

Inside, late to the set, TMZ said an emotional Smollett showed up red-eyed and apologetic, but also defiant, reportedly telling the cast "I swear to God I did not do this."

However, police and prosecutors claim the now-accused felon staged his own hate crime last month, allegedly paying two brothers to yell homophobic and racial slurs and rough him up in the Streeterville neighborhood near his apartment.

RELATED: Timeline of key events in the Jussie Smollett case

An outraged Chicago Police Superintendent Eddie Johnson said Smollett's motive was that he was "dissatisfied with his salary."
RELATED: 'Empire' actor out on bond, staged attack due to salary dissatisfaction, police say

"'Empire' actor Jussie Smollett took advantage of the pain and anger to promote his career," Johnson said. "I am left hanging my head and asking, 'Why? Why would anyone, especially an African-American man, use the symbolism of a noose to make false accusations? How could someone look at the hatred and suffering associated with that symbol and see an opportunity to manipulate that symbol to further his own public profile? How can an individual who has been embraced by the city of Chicago turn around and slap everyone in this city in the face by making these false claims?'"

The actor's legal team fired back, saying in a statement, "Today we witnessed an organized law enforcement spectacle that has no place in the American legal system. The presumption of innocence, a bedrock in the search for justice, was trampled upon at the expense of Mr. Smollett and notably, on the eve of a Mayoral election. Mr. Smollett is a young man of impeccable character and integrity who fiercely and solemnly maintains his innocence and feels betrayed by a system that apparently wants to skip due process and proceed directly to sentencing."

A source close to the actor told ABC News that showrunners told Smollett he wouldn't be fired due to safety reasons and the intense attention currently on him, but that they thought the best decision for now is to write him off the last two episodes.

TMZ reports that several of Smollett's castmates want him fired. They believe the show's reputation has been damaged.

An episode of "Drop the Mic" Smollett was a part of is also being pulled, TNT told ABC News on Thursday.

"We are pulling the episode in the interest of not being exploitative of an incredibly sensitive situation. We are holding on airing his episode for now and we are replacing it with the Raven Symone vs Ron Funches and Joey McIntyre vs Joey Fatone episode," the network said in a statement to ABC News.

Smollett is due back in court March 14, when he will enter his plea. If Smollett is eventually convicted of the charge, he could face up to three years in prison. He could also face substantial fines.