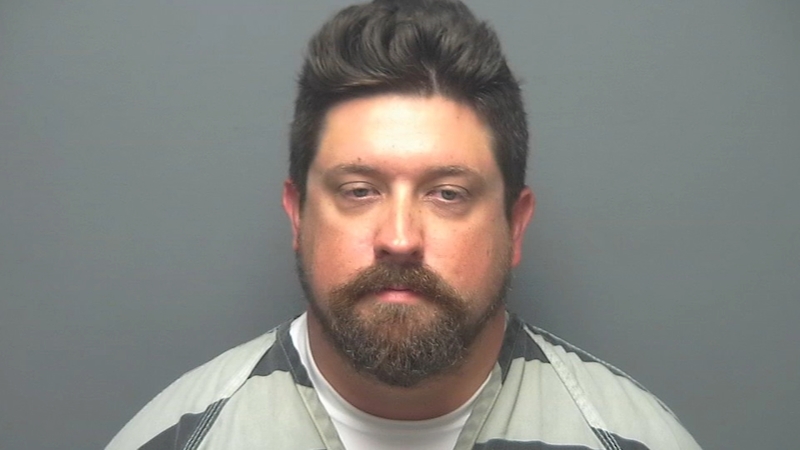 Joseph Johnson is accused of soliciting a minor online.

"It's a very disturbing case," said Rosen. "We're talking about an individual who is charged with taking care of kids every single day in a classroom environment, on a baseball field, and this just betrays the trust of all those children."

The constable's office executed a search warrant for Johnson with the help of the county's Internet Crimes Against Children's Task Force.

Authorities say Johnson had worked as a history teacher and head baseball coach at Caney Creek High School since August 2020.

Undercover officers reportedly started communicating online through social media and texting with Johnson in September and October of last year.

Johnson later engaged in explicit texting conversations with the officers, who he thought were 14-and 16-year-old girls, investigators said.

The coach is accused of communicating with two people he believed to be teenage girls and sending explicit pictures. Now, authorities believe more victims may be involved.

"This case led to Montgomery County because a lot of the solicitation happened while on school grounds," said Rosen.

"He communicated with them over an extended period of time," Rosen said. "He sent some explicit pictures of himself, and they did attempt to set up a meeting location in the Woodlands."

Rosen said Johnson communicated with the 16-year-old undercover persona up until his arrest Wednesday.

While Johnson communicated with undercover agents in this case, Rosen said he believes Johnson has had relationships with former students.

"We believe very strongly that there are more victims that we need to talk to based on his assertions during our interview," Rosen said. "We would like the public, and please put his picture out, so that we can find other victims."

Prior to his employment at Caney Creek High School, Aldine ISD confirmed Johnson worked as a head coach in the district for six years from August 2014 to August 2020.

The district says Johnson resigned to work at Conroe ISD, and had no disciplinary actions while there.

Johnson was booked into the Montgomery County Jail Wednesday evening. Rosen says they are working with District Attorney Kim Ogg's office and could file additional charges in Harris County.

"We're working very closely with our district attorney's office to file additional charges, because some of the online solicitation took place in Harris County, at Mr. Johnson's residence," Rosen said.

Conroe ISD released a statement acknowledging the charges against Johnson.

Over the next few days, you will likely see and hear news reports regarding our school. I wanted you to hear directly from me accurate information about what has happened. Joseph Johnson, a history teacher and baseball coach at Caney Creek High School, was arrested today by the Harris County Pct. One Constable's Office. He has been charged with online solicitation of a minor. Mr. Johnson was hired on August 4, 2020, and we are working through our processes to put him on administrative leave effective immediately.