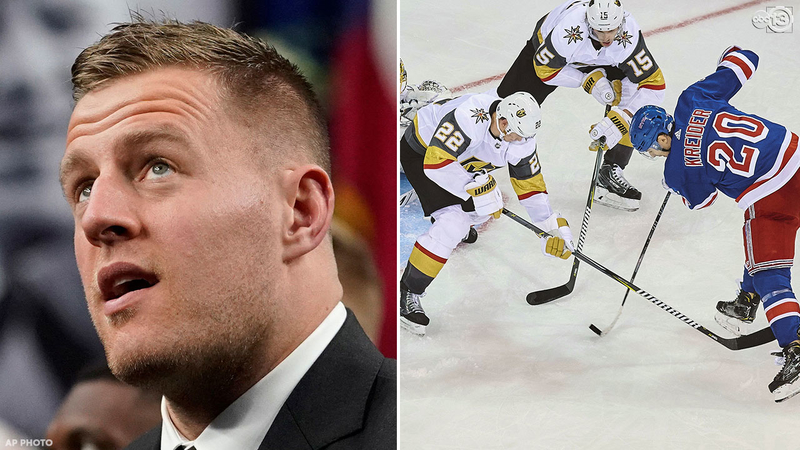 HOUSTON, Texas (KTRK) -- J.J. Watt is so dominant on the gridiron that he could get whatever he wants, even acting upon his desire for hockey in his adopted hometown of Houston.

On Wednesday, Watt spoke to reporters ahead of the Houston Texans' pivotal matchup vs. the Philadelphia Eagles.

Watt answered questions on preparation for the contest, before landing on a line of questioning about growing up as an athlete of multiple sports.

Speaking on how multiple disciplines help his skillset, Watt attributed his superstar athleticism to early exposure to ice hockey.

"I've always said that one of the reasons I think I got a chance to become a good athlete was because my parents taught me how to skate at the age of three. So, I was learning how to balance on a razor-thin blade when I was three years old and my body had to learn how to balance and adjust to that at such a young age," Watt said.

He even said there are photos of him in skates in his 20s.

Then, he affirmed that he would take up hockey if he were a two-sport athlete now.

"I love hockey. It would probably be hockey. I'm a huge hockey fan, and I love to skate, I love playing," said Watt.

Watt then turned to a desire to see pro hockey in H-Town.

"Maybe we can get an NHL team here in Houston. If you know anybody, let me know. I'd like to get in on that," Watt said.

In any case, Houston has flirted with bringing the NHL to the city, chiefly spearheaded by Rockets owner Tilman Fertitta.

For now, Houston's chances for a future franchise seem to be dampened by Seattle winning an expansion team recently.

But J.J. Watt's desire might be key for the city's venture into pro hockey. At least one fan is leaning in, invoking the spirit of the former Houston Aeros:

ABC13 captured this great and unsurprising moment: J.J. Watt making time for men in uniform after Texans win in Denver.

Watt shared the sweet on Twitter photos of Jeremy and his family inside the NRG Stadium just before Sunday's game against the Buffalo Bills.