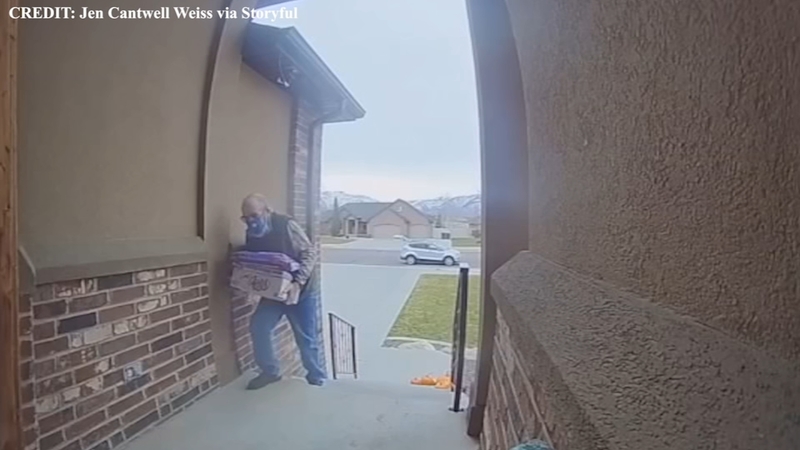 OGDEN, Utah -- A woman used social media to help raise money for an elderly veteran who took a delivery job to help pay for repairs to his home.

On Nov. 15, Jen Cantwell Weiss shared video of a delivery driver struggling to get up the steps of her home to drop off groceries.

"I didn't watch this video until after he was already gone, or else I would have gone out to help him," Weiss wrote on Facebook.

A relative of the man saw the video on social media and put Weiss in touch with the delivery driver.

After a brief introduction, Weiss learned Larry was a veteran who suffered a stroke earlier in the year and had to learn how to walk again.

Weiss shared Larry's story on Facebook, saying he took the delivery job to pay for repairs to his roof, and asked for people to help him with the costs.

Weiss posted his Venmo information and the donations started to roll in.

"I have been in touch with him and he is overwhelmed with gratitude," she wrote on Facebook. "He did NOT ask for any help, but I love that people are touched by his story and want to help lighten his load a bit."

Larry said the donations covered his roof repairs and he no longer has to do deliveries.

Weiss shared an update on Facebook, saying Larry and his wife "requested that rather than continuing to donate to him, you donate to Toys for Tots or your local food bank. He says he has received more than enough and feels there are so many others out there who need the help more than he does. He expresses his heartfelt gratitude for everything people have sent."
Report a correction or typo
Related topics:
societyutahviral videofacebooksocial mediau.s. & worldfeel goodveteran
Copyright © 2022 KTRK-TV. All Rights Reserved.
TOP STORIES
Timeline breaks down Uvalde school massacre
Texas gunman threatened rapes, shootings on Yubo app, users say
1 dead and at least 3 injured in wrong-way crash, Pasadena PD says
Here's your holiday weekend forecast
Woman gets 15 months in prison for punching flight attendant
San Antonio artist creates memorial for Uvalde victims
Former Uvalde school teacher grieves for her mentor, students killed
Show More
NRA day 1: Trump calls for school security overhaul in Houston speech
Beto O'Rourke, Parkland survivor challenges NRA in Houston protest
Houstonians travel to Uvalde to show support
Uvalde school police chief faulted in shooting response
Official admits police made 'wrong decision' in TX shooting
More TOP STORIES News