Jazmine Barnes' dad says wrong man is on trial as both sides rest cases: 'This is a circus' 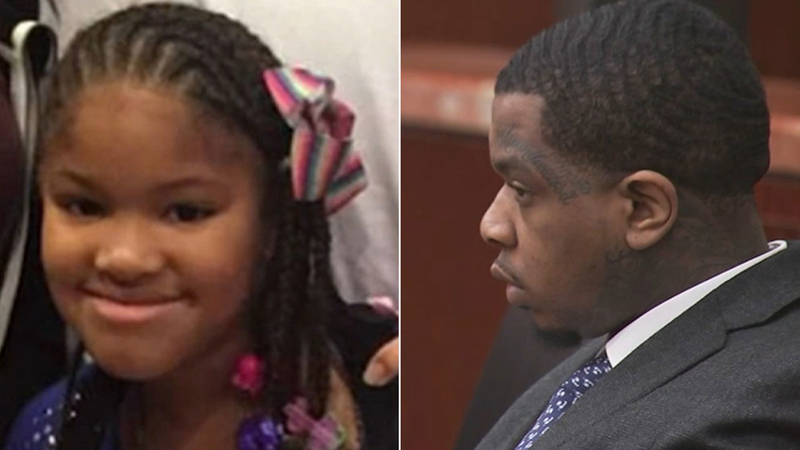 Jazmine Barnes' dad says wrong man is on trial: 'This is a circus'

HOUSTON, Texas (KTRK) -- A trial over three years in the making will enter closing arguments Friday as both sides rested their case in the capital murder of 7-year-old Jazmine Barnes.

Larry Woodruffe is on trial for the little girl's killing that happened on the East Beltway feeder in December 2018. Both prosecutors and Woodruffe's attorneys rested their cases Thursday.

Earlier, the defendant's attorneys spent time questioning Sgt. Jason Brown with the Harris County Sherriff's Office about the "white man in a red truck" description that became prominent early in the investigation.

At first, during the time of the shooting, police put out a sketch of the suspect, believed to be a white man with blue eyes, in a red pickup truck.

The description came from Jazmine's sisters who claimed to have seen the gunman. They told police at the time, their mom, who was driving the car, had gotten in a fight with the white man at a store.

Jazmine's father, Christopher Cevilla, is still convinced police have the wrong killer, based off of what Jazmine's sisters told him back in 2018.

"I think it's a circus, there's a bunch of lies being told," Cevilla said. "She told me out of her own mouth, nothing I made up, 'Oh, I've seen the killer, I looked him in his eyes, he had blue eyes.'"

Officials believe the truck the girls saw was just passing by and there was never an argument.

In 2018, as the story made national headlines, two political activists, including Shaun King, took to social media and offered a reward of $100,000 for anyone who identified the man in the sketch.

Robert Cantrell, 49, was arrested the same day Jazmine was killed, for unrelated charges of robbery and evading in a motor vehicle. His photo, which resembled the sketch, went viral, and King took to Twitter, claiming the shooting was a racial hate crime.

Cantrell took his own life inside his cell at the Montgomery County Jail in July 2019, after officials said he and his family were receiving death threats.

The investigation took a major turn when a tip led them to then-20-year-old Eric Black and 24-year-old Larry Woodruffe. In court on Thursday, it was revealed the tip came from a cousin of a woman Woodruffe has a child with.

According to the prosecution, Woodruffe used Black's gun during the shooting. A firearm examiner took the stand Thursday, and said the bullets fragments matched Black's gun, which Woodruffe's defense attorney tirelessly fought back on.

Woodruffe's defense attorney argued police never put the same effort into vetting Cantrell as a possible suspect. In court, Sgt. Brown testified they never checked to see if he had a red pickup truck, tracked cell phone records, or obtained a warrant for DNA.

Eric Black, 23, who is believed to be the driver and is also charged with capital murder in the case, took the stand to testify against his friend Larry Woodruffe, 27, on Wednesday.

Black, who is awaiting sentencing, recalled going to church when he found out an innocent little girl was the one shot and killed, and not the men he was targeting.

According to Black, he and Woodruffe were sitting in the car selling drugs together on the day Jazmine died, as he said, they did almost every day.

He testified that a silver Dodge Avenger pulled in front of them. When the windows rolled down, he recognized the group of men from selling drugs to. The men had been threatening him on Twitter, he said.

The car drove off, and while nothing happened, Black took it as a threat and said he and Woodruffe went to retaliate.

The men switched out of the Cadillac they were in, because the car was under Black's father's name and switched into his mother's rental car, which was a silver Kia Sportage.

Black testified that Woodruffe sat in the passenger seat with Black's gun, and they found the car they believed the men they wanted to retaliate against were in. However, they kept a distance because they didn't want the men to see them. In court, Black said there were a lot of heads in the backseat, so they believed it was them.

Black said they followed the car onto the Beltway, and as they got closer, Woodruffe hung out the passenger side and shot nine times. He said they saw the silver Dodge swerving, so knew they had been successful in shooting someone.

The men switched cars again after Black said he went home and put the gun under his mattress to return to the crime scene. There, he said he saw white sheets on the car and knew someone died.

It wasn't until he saw on the news it was a little girl that was the one killed. Nervous and feeling guilty, Black said he went to church, something he didn't regularly do.

At first, police believed the suspect was a white man in a red pickup truck, so Black said he believed he got away with it. That is until he was pulled over during a traffic stop.

The defense argued that Black's testimony is out of self-interest in a shorter sentencing. In exchange for his testimony, the state agreed to 5-35 years as possible punishment, instead of 99 years.

Black's credibility was also questioned, as he admitted to lying to police throughout the investigation and his interrogation. At one point, he told police he tried to stop Woodruffe from shooting by hitting his hand down on the gun, but admitted to lying about it in court.

Washington's criminal record includes felony theft and possession of a controlled substance, which she spent time behind bars for.

"I don't believe penitentiary or anything like that for anybody because I have been down that road, so I know how it feels to be locked up," Washington said. "Knowing he's gonna lose his life is horrible. It's really horrible. Even though I lost my baby, knowing another parent is going to lose their child is a horrible thing to feel."