I-45 expansion project remains stalled due to federal investigation 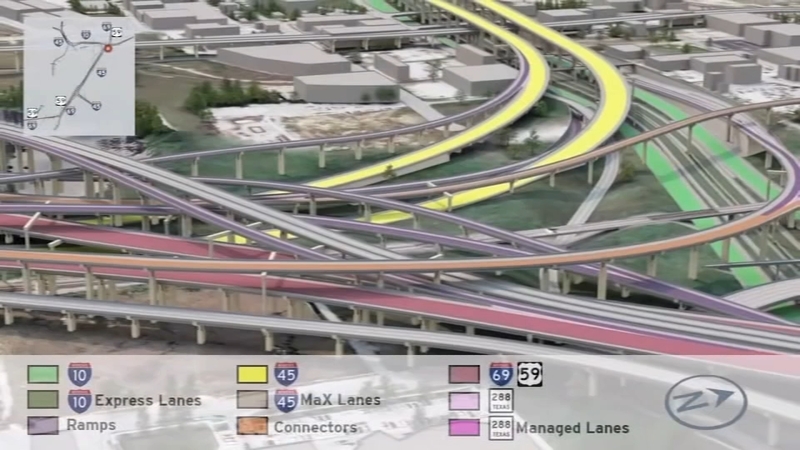 I-45 expansion project remains stalled due to federal investigation

According to TxDOT, the project's total cost could likely climb as it continues to be delayed.

It's one of the largest construction projects in the state. The North Houston Highway Improvement Project, commonly known as the I-45 expansion project, is designed to widen I-45 through downtown to Beltway 8 to address congestion.

According to TxDOT, additional costs will increase prices due to inflation and change in designs presented by the Houston-Galveston Area Council this week, bringing the project's estimated total cost to more than $9 billion.

The project would also impact more than 1,000 homes in its path.

Chloe Cook is a volunteer with Stop TxDOT I-45. The group opposes the project and supports the voices of local businesses and families that the construction could impact.

"This is by far the biggest project the state of Texas has ever taken on," Cook said, "and TxDOT likes to talk about how its 20, 30, 40 years in the making at this point means that this project is already outdated. As a taxpayer, I would love to see my money used to fix what's already there instead of rebuilding and expanding because the negative impacts are so huge."

Cook said volunteers with Stop TxDOT I-45 plan to head to Austin for the Texas Transportation Committee meeting scheduled for April 20 and encourage others to join them or submit public comments.

According to TxDot, the project remains on hold due to an active investigation by the Federal Highway Administration.

The Harris County Attorney's Office also filed a lawsuit against TxDOT regarding the project and sent the following statement to ABC13 Friday afternoon:

"Our office is continuing to negotiate with TxDOT to bring the NNHIP into the 21st century, with transposition solutions that benefit all harris county residents and mitigate environmental impacts on surrounding communities."

"The Houston area continues to grow rapidly. The area has seven million people with a projected population growth of more than 80 percent by 2050. The I-45 corridor in Houston is home to nine of the top 25 most congested roadways in Texas. With the North Houston Highway Improvement Project (NHHIP), the Houston region will receive more than $43 billion in economic development, reduced travel times, environmental benefits, and much more. The NHHIP is more than a decade in the making with extensive local input and regional support. It will bring much-needed and significant improvements to I-45 to enhance safety and mobility as our state continues to see robust population growth and freight traffic. The project will also replace aging infrastructure and help with flooding issues along the corridor while improving routes that could be used during an evacuation."