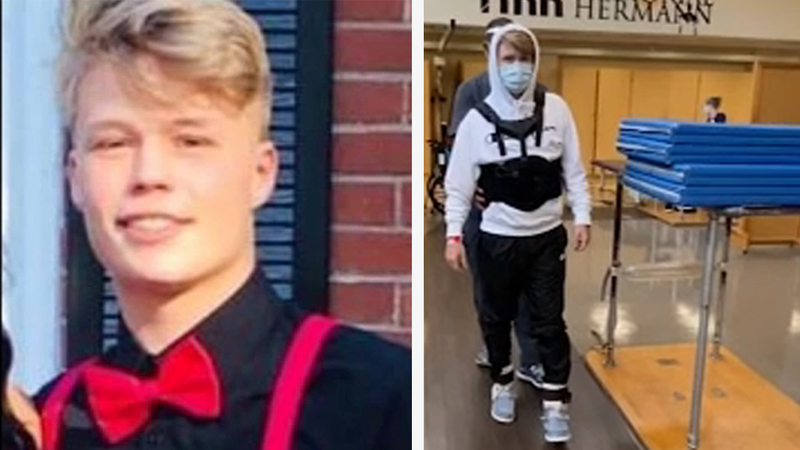 Before Hurricane Laura hit, one family was already going through a terrible tragedy. High school football player Ethan Arnold was told he may not walk again after a car crash.

In August, the 16-year-old went to a party. Once he party was over, Arnold called his family for a ride home but ended up leaving with a group of friends.

"The guy that was driving had been drinking and we just got in a pretty bad accident," he said.

Ethan's mom April Jordy said her son was taken to the hospital by Life Flight and had to be sedated due to his injuries.

"His friend called me on Facebook Messenger," April said. "It was terrifying. It was very scary because it's just a waiting game and it's like moment-by-moment."

Arnold suffered from a broken back and collar bone and a punctured lung.

"The doctor, before he did the neurosurgery, said that his spinal cord injury was so bad that they didn't know if he would ever walk again," said Jordy.

The family said the news was devastating.

"I cried. I couldn't stop crying for quite some time just because I hadn't really thought of it that way," said Jordy.

Meanwhile, Hurricane Laura was headed straight for their hometown, about 25 miles north of Lake Charles.

"It was a very scary time. Our whole world kind of got shook up," she said.

Arnold was at a hospital in New Orleans at the time. Once he had back surgery, the teen said he knew he was able to overcome anything.

"I could still feel my legs, and I knew if I wanted to enough, which I do, I could do anything," Arnold said.

After two surgeries, his family headed to Houston for rehabilitation at TIRR Memorial Hermann.

"Spinal cord injuries can affect all the different parts of the body and our nurses and our doctors and our therapists specialize in those different aspects and we pay attention to the whole person," said Dr. Lisa Wenzel.

"He came here in a wheelchair. He could walk 50 feet maybe, with a walker. He's walking without the walker, just phenomenal," said Jordy.

After two-and-a-half weeks at TIRR, Arnold was walking and making tremendous strides.

"When we went to TIRR, he had like five hours of therapy and introducing him how to care for himself and getting dressed. His improvement was dramatic from the time we got to TIRR until the time we left," said Jordy.

As for their house, it had roof damage but nothing too severe. The tarp from Laura remains on their house, as they prepare to evacuate for Hurricane Delta.

As Ethan continues to recover, he said he wants to encourage people to never drink and drive and to embrace each moment.

"Cherish everything you love because it can be gone in a second," he said.