'I really admire this lady': Couple married 68 years renews vows with dozens others at Hotel Galvez 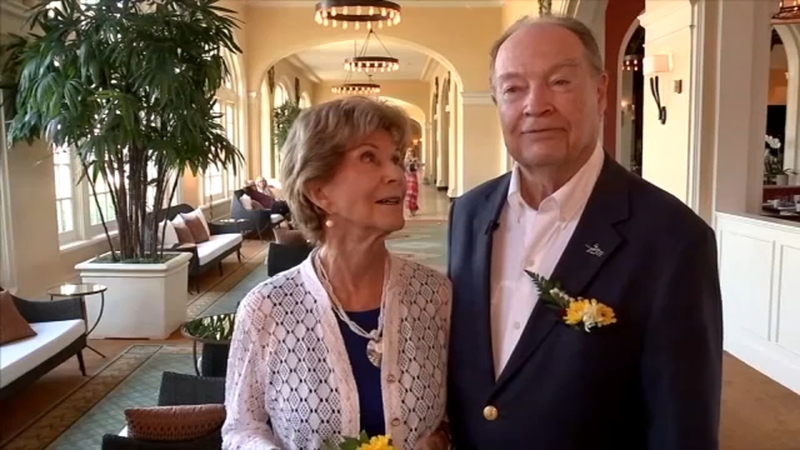 GALVESTON, Texas (KTRK) -- To celebrate the 108th anniversary of the Hotel Galvez, 40 couples renewed their vows in a ceremony over the weekend at the resort.

Approximately half of the participating couples have been married for more than 30 years.

One of them, Jack and Alice Thomas, of Nassau Bay, celebrated 68 years of marriage. They were married in 1951, when both were 21. Sixty-eight years later, they shared their secrets to a long and successful marriage.

"Love and admiration for the other person, and I tell ya, I really admire this lady," Jack explained.

"Every time you go someplace, hold hands. The most important thing you can do when you're out and about," Alice added.

The group ceremony was hosted by Hotel Galvez & Spa, A Wyndham Grand Hotel. It started this tradition during its centennial anniversary back in 2011.

Hotel Galvez opened on June 10, 1911. This year's ceremony was officiated by Justice of the Peace Jim Schweitzer.

Learn more about the hotel and its history at www.hotelgalvez.com.

Want to see more from the heart of your community? Check out your town's stories through ABC13's HTX+ Facebook page.
Report a correction or typo
Related topics:
societygalvestonhotelabc13 plusweddingsabc13 plus galvestonwedding
Copyright © 2022 KTRK-TV. All Rights Reserved.
ABC13 PLUS
Roop Sari Palace is the ultimate place to find saris
Born to run: The legend of Sonny Kasianowitz
Boss life! 13-year-old turns bow ties into big business
Here's how to land a job in Alvin during ABC13's virtual job fair
TOP STORIES
IRS conducting criminal investigation in Uptown Houston
Woman stabbed to death allegedly by husband was a Katy ISD employee
Northbound I-45 blocked before FM-518 in League City
Here's how many inches of rain you could get over the next 7 days
Investigations resume for parents of trans children, lawyers confirm
Houston gets highlighted as stop in the GMA 'Rise and Shine' tour
Wanted suspect shot and killed by Pasadena police during foot chase
Show More
Police arrest man charged in robbery and kidnapping caught on video
United cancels couple's flight, charges $4K more for same seats
Trump pays $110K fine, but must submit paperwork to end contempt
From Disney+ to Hulu and ABC13, here's what to binge
Chase suspect in stolen SUV crashes into innocent driver: Officials
More TOP STORIES News