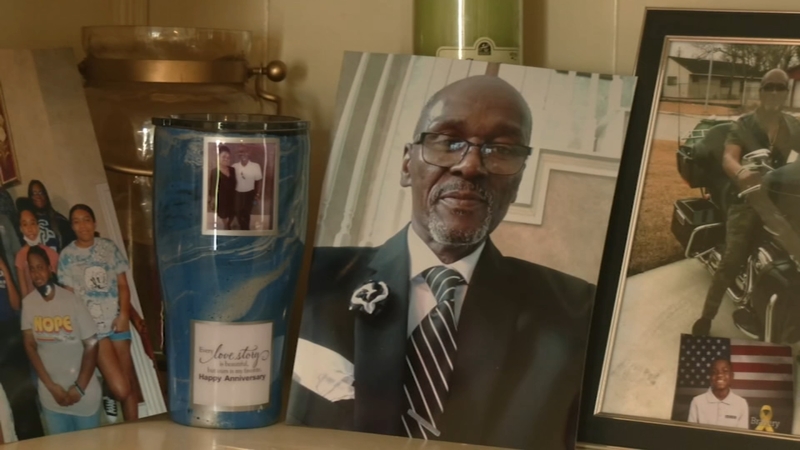 Carjacking victim expressed security concerns before he was killed

HOUSTON, Texas (KTRK) -- The wife of a man who police say was killed by a carjacking suspect Tuesday morning at an apartment complex near River Oaks told ABC13 her husband had expressed a lack of building security before.

Onnita Hayes said her husband, Carrl Hayes, was working an overnight shift as a foreman when a man carjacked Carrl while he was watching over the site. As Carrl walked away toward the complex's office, the suspect ran over him and crashed into the lobby.

The crazy sequence of events happened at about 3:24 a.m. at the Hanover Autry Park apartment complex on 811 Buffalo Park Drive.

"He would come home and tell me how cars and vehicles have been broken into throughout the day," Onnita said. "I would always tell him, 'They need security over there."

Carrl was used to working that overnight shift. He had been at the Hanover for eight years.

"The only security he mentioned to me was they had cameras, and I would tell him, 'The cameras are not going to get it,'" Onnita said.

Still, the 67-year-old loved his job.

"He was never nervous," Onnita said. "He loved his job."

She said her husband would send her a good morning text every day at 4 a.m. When Onnita didn't hear from him Tuesday, she said she knew something was wrong.

"I immediately broke down. I said 'Don't do me like this. I don't want to hear that,'" Onnita said when she heard the news.

The Hayes family were not the only ones impacted. Houston police say after running over Hayes, the suspect took aim at the concierge, who was hiding in a nearby office.

The Hayes family were not the only ones impacted. Houston police say after running over Hayes, the suspect took aim at the concierge, who was hiding in a nearby office.

"The suspect crashed into secondary office, trying to get to the concierge," said Houston Police Chief Troy Finner, adding the concierge escaped injury. However, a third person was not as lucky. "A third person came into the office, the suspect stabbed him in the back."

Police said that as they approached the suspect and tried to get him to drop the knife, he lunged at them, and at least two officers fired shots. The suspect was injured but survived.

"It is a brand new building," said Drew Muntz, among a handful of residents who recently moved into the building. "I like the building, (the) people who run it are very good. I've only been here for six weeks!"

As of Tuesday evening, Houston police had no motive behind the attack.

Back at the Hayes home, relatives spoke about how he leaves behind a stepson he helped raise with his wife. Onnita said he came home around 7:30 a.m. each day and would take his stepson to school.

"He was one of the best guys you ever wanted to meet," Hayes' wife said. "He helped anybody, any day. Any time of the night."

ABC13 reached out to the Hanover Apartments for comment on the security and whether this incident will change overnight security measures but have not heard back. The Houston Police Department has since reached out to Onnita and her family.